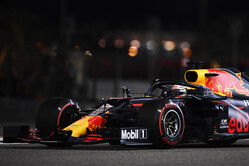 George Russell topped the timesheets in both of yesterday's sessions, while teammate Valtteri Bottas struggled. Damaging his floor on the Turn 8 kerb in FP1, the Finn had his best time in the second session deleted for exceeding track limits at the same corner.

In fairness, Bottas wasn't the only driver struggling, and over the course of the day we saw a number of drivers locking-up, spinning and running wide as they struggled for grip.

On the longer runs the Red Bulls appeared to have the edge, so much so that Toto Wolff actually texted Christian Horner to say so.

While Renault, Racing Point and AlphaTauri looked good, the latter particularly so in the morning, Ferrari struggled.

While this session should give a better idea of the pecking order, qualifying is anyone's guess, for besides outright pace the big factor is going to be traffic and track conditions. This morning's F2 race demonstrated that we can expect some good racing, however yesterday's qualifying session was clear proof that traffic can be a nightmare here.

Toto Wolff has denied suggestions that Russell and Bottas are in a potential shoot-out for the second 2021 seat, nonetheless the Finn must stamp his authority on the team today (and tomorrow).

The lights go green and Fittipaldi is first out, sporting the softs. He wastes no time in getting proceedings underway, crossing the line at 56.499.

Following a couple of cool-down laps the youngster, who has the track to himself, improves to 56.249.

Ten minutes in and Fittipaldi, who has completed 10 laps, remains the only driver to make an appearance.

Following a big lock-up at Turn 4, Fittipaldi heads back to the pits... to join his 19 colleagues.

Norris, Magnussen and Vettel head out, the German hoping that his set-up has improved dramatically since yesterday.

As more drivers head out it is a noticeable mixture of hards and softs.

As Ricciardo begins his first flying lap, there are four or five cars behind him, all jostling for position. The Australian posts 55.311.

Russell heads out, followed by his good friend Albon. Bottas subsequently joins them, while Verstappen, Kvyat and Gasly stay put.

Sainz goes quickest in the first sector, finally crossing the line at 44.453 as Albon goes third with a 55.416.

24 minutes in and Verstappen and Kvyat finally head out.

Quickest in the final sector, Stroll goes sixth with a 55.406. However, the Canadian, who is the only driver on mediums, subsequently has his time deleted.

Kvyat goes third with a 55.144, as AlphaTauri continues to impress.

In the McLaren garage, mechanics are working on the rear left of Norris' car.

No such issues for Bottas who goes quickest in S1. He maintains the pace in S2, finally crossing the line at 54.523, which puts him 0.477s ahead of his teammate.

Verstappen retakes third with a 55.091, as Albon has his latest timer deleted. Both are on the hards, while the Black Arrows are on softs.

Vettel is the first to head out for a qualifying sim, The German, who has the track to himself, going second with a 54.858, 0.335s down on Bottas.

"I was quite happy there," reports Vettel as he agrees on a double cool-down before his next flyer.

The Mercedes pair head out to join the four-time world champion.

Leclerc goes third with a 54.854 as more and more drivers head out.

Wow! Giovinazzi goes third with a 54.845. Where did that come from?

Latifi reports that his last corner was "compromised by traffic", the reality being that he is going to have to get used to it.

Ferrari reveals that Vettel is facing a potential engine change.

A lock-up for Russell who isn't looking as smooth as yesterday, while Vettel is walking to the Ferrari hospitality unit.

A very, very scrappy lap from Ricciardo leaves the Australian 16th. The Renault driver subsequently improves to 14th with a 54.857.

Kvyat reports that Sainz is consistently cutting the chicane.

A late spin for Leclerc, the Ferrari driver finishing the session 13th.

An interesting session and one which confirms that Verstappen has the pace to cause an upset today. Having put yesterday's nightmare behind him, Bottas looks capable of assuming team leader status, though Russell is sure to spend the lunch-break looking into those areas where he is losing out.

As expected, Gasly, Ocon and Norris are in the fight, while the Points are looking a little better than they did yesterday.

Add in the change in conditions we can expect later - the session gets underway at 20:00 local time - and traffic, and we could be in for a few shocks and surprises.