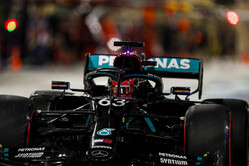 Ahead of today's session the air temperature is 26.2 degrees C, while the track temperature is 30.2 degrees C. It is 16:45 local time and the sun is setting. According to race control there is 0% chance of rain.

In case you've been in hibernation or visiting another planet - is that possible under the COVID restrictions - Lewis Hamilton is not in action this weekend, the Briton testing positive for said virus. His seat is taken by George Russell who in turn is replaced by Jack Aitken at Williams.

Meanwhile, at Haas Pietro Fittipaldi is standing in for a certain Mr Grosjean.

As if last weekend wasn't eventful enough, this weekend we are on an 'oval' layout on which lap times are set to be sub-60 seconds and traffic is likely to be a nightmare.

The lights go green and Giovinazzi leads the way, followed by Norris and Fittipaldi. All three are on hards, unlike Kvyat who is on softs.

More and more drivers head out, each completing the one installation lap before heading back to the pits.

As Aitken heads out in the Williams, Russell looks set to follow.

THE VSC is deployed but it is unclear why. Indeed, it is almost instantly withdrawn again.

Bottas and Sainz appear to think it's Sunday afternoon already, as the pair jostle for track position.

As Russell climbs into his car, Sainz (on hards) posts a 56.631, which suggests we are in for some frightening lap times this weekend.

15 minutes in and Russell heads out, the Mercedes sporting softs.

We're still only twenty minutes into the session and Ricciardo is down to 55.845, with Bottas (hards) posting 55.154 moments later.

Russell reports "a lot of sand blown across the track on Turn 6". The Briton is currently 7th on 56.156.

The yellows are waved momentarily when Leclerc goes wide in Turn 5.

All 20 drivers have now posted times.

Gasly has a loose (right) wing mirror and has to use his left hand to keep it in place. "The whole thing is broken," he warns his team as he heads into the pitlane.

The VSC is deployed one again, and as before it is unclear precisely why. In the light of last weekend's events, officials might be feeling it best to err on the side of caution.

Following a brief lull, Fittipaldi breaks the deadlock, heading out on softs. He is followed by Sainz and Norris, who are also on the red-banded rubber.

As Ocon goes fourth (55.273), Bottas begins his flying lap, however he subsequently aborts.

His next lap isn't too impressive, the Finn appearing to push just a little too hard, running wide in Turn 8.

Kvyat goes third with a 55.045, as Verstappen complains that his steering wheel has gone "right-hand down".

Elsewhere, a big lock-up for Perez in Turn 7 as he seeks to improve on 15th.

Leclerc runs wide in Turn 8 after coming across a slow Vettel.

Albon goes top with a 54.811, though he doesn't go quickest in any of the sectors.

Bottas is told to respect the white line in Turns 7 and 8 as Russell goes quickest with a 54.546.

Having gone quickest in S1, Verstappen makes a mistake in S2 but still improves to second (54.722).

Albon spins in Turn 3, the youngster doing well to avoid the barriers after hitting the gas a little too hard and a little too early.

Attention now turns to high fuel running, Latifi (mediums) and Aitken (hards) the only drivers not on softs.

As the clock ticks down, Bottas has another big lock-up, the Finn really struggling, indeed more so than usual.

One gets a bot of a shock on seeing that Russell has completed 47 laps and Ocon 48 - the most of all 20 drivers - until one realises the fact the track is only just over 2 miles long.

Speaking after the session, Toto Wolff reveals that while Bottas picked up some floor damage early in the session, both drivers were carrying out similar programmes with similar fuel loads.