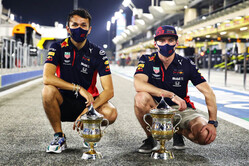 Last weekend's double podium for the team was a good boost to everyone. How was it?
Max Verstappen: Yeah, it's been a while since we had a double podium and it was great for everyone in the team.

I was pretty surprised how long it's been and also that it didn't happen in 2018 as we had a decent package.

That's what you want as a team and of course at the moment we're a bit slower than Mercedes but when they make a mistake we need to be there to capitalise and that's what we did, we both maximised everything we could.

Also on my side it was nice to be back on the podium after the last two races didn't go as planned and now it's just about trying to finish the season with the best results we can.

This weekend we're racing on a different and shortened track layout. Are you expecting a chaotic race?
MV: With such a short track it will be difficult to get a clear lap in qualifying, especially with it being about a 54 second lap. I think everyone on track is going to be within 150 metres! I think blue flags and backmarkers will be interesting but lap times should be a bit closer so I don't expect the gaps to be as big.

What did you mean by your post-race comments about Romain's accident?
MV: I think people misunderstood what I meant. What I was trying to say is that as drivers we know the risks when we get in the car and if anyone has doubts they should consider stopping racing.

There is nothing wrong with that if you feel uncomfortable to race but we are part of a team and they rely on us to do our job which is drive the car. Had Romain not walked away obviously things would have been very different on Sunday.

I think back in the 60s and 70s it was way more dangerous and the drivers of that era were still going out on track because they knew it was their job and that's what they loved to do, even though they knew the risk was very high of losing their friends around them. The safety in place now is incredible and I respect everyone's own decisions but that is how I feel. Nobody ever wants to see an accident like that but all that really matters is that Romain is ok.

Last weekend's Bahrain Grand Prix saw you get your second F1 podium. How happy are you looking back on the weekend?
Alex Albon: It was definitely nice to get back on the podium and it was also the team's first double podium for some time so that's positive. More importantly though it was a good amount of points and now we just need to continue like this.

What are your thoughts on this weekend's revised track layout and what should fans look out for?
AA: Well we are racing at the same circuit in Bahrain but on a revised layout and it's definitely very different. I think if we are doing double headers at the same track, like we are here, then it's a great idea to change the layout of the circuit as it spices things up. This layout is going to be very unique and I believe it will make for some good racing, plus with such a short lap, it will be the most laps we've done in a Grand Prix. Qualifying is going to be very difficult in terms of getting a clear lap and that will add another dimension and make it interesting. But looking back at tracks like Turkey and Mugello, these 'different' kind of tracks tend to make for great races so hopefully that's the case this weekend.

Some other drivers have said this layout could make for chaotic conditions. What is your view?
AA: There's not much you can really do besides being on your toes and adapting to the situation. Qualifying could be messy but there should be enough time to get a reasonably good lap in. Firstly you've got to get a clear lap in but also not get in someone else's way. It will be tricky out there and just looking at Sakhir on paper, working with your engineer on car set-up and communication will be key at a new and unique circuit layout like this. As the track is so short I wouldn't be surprised if there's a DRS train as there's little separating the cars on track and we cannot social distance out there!

The RB16 was pretty hooked up last weekend but do you think the change in layout could hurt us?
AA: I think it could be more of a challenge for us this weekend because the layout is more power sensitive. I expect with such a short lap the times will be very close so we'll need to ensure we have the car set-up really hooked up. We know from last weekend we have things to improve on and so we will build on that through Friday, Saturday and keep tuning the car for the race on Sunday.

It's the penultimate race of this condensed race season. How are you feeling going into these last two races?
AA: It's been a very hectic season for everyone and we're finishing on a triple header which is hard for the mechanics but my focus is to the year as strong as possible. y drive and motivation to push forward and get the best results I can is as a strong as ever.