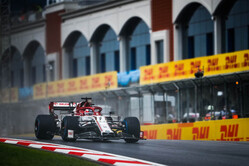 The fourteenth round of the season turned out to be a rollercoaster affair as a thrilling race unfolded in Istanbul. Following a strong showing in qualifying, with the best Saturday results of the season and both cars in Q3, things got a bit more challenging for Alfa Romeo Racing ORLEN in the race.

The threat of continuous rain did not materialise and the race turned into a battle on a gradually drying track, with drivers tip-toeing around on a soaked circuit at the start, then gaining confidence and speed as the surface improved and the field moved onto intermediate tyres.

In these conditions, keeping hold of our lofty starting positions was always going to be a tall order: Kimi and Antonio had a strong opening stint, holding their own, but once on the green intermediates, things became harder.

Antonio's race ended abruptly at the start of his second stint, a technical issue forcing him to park the car by the side of the track. For Kimi, it became a solitary race eventually closed in 15th place. Despite the point-less return for our efforts, the good display shown in qualifying represents a big confidence boost for the team. With our direct rivals not scoring and only three rounds left on the calendar, our grip on eighth place in the championship intensifies. The finish line is in sight, but there is still a lot of work to do - and our team is ready to rise to the challenge.

Frederic Vasseur, Team Principal: "We weren't able to capitalise on the very strong performance we delivered in qualifying yesterday, when we were among the fastest on track. Our race was challenging, with tyres being very hard to manage: we would have probably been able to hold our own on a wet track, but in progressively drying conditions we did struggle. In the end, we lost Antonio due to a technical issue early in the race and Kimi finished 15th, which is not what we had hoped. As a positive, at least, we didn't lose any ground on our championship rivals and we are one step closer to confirming our eighth place in the standings, with three races left."

Kimi Raikkonen: "The race was far from fun, but it's a bit what we expected once we saw the weather. We would have probably had a much better speed in a full wet race, but the mixed conditions definitely didn't work in our favour. We struggled to make the tyres work, when they did they'd be good for ten laps and then fall off, so it was hard to get into a good rhythm. At least, we didn't lose any points in the championship to our rivals."

Antonio Giovinazzi: "It's been a challenging Sunday after yesterday's strong qualifying results. I lost the car on the way to the grid, but luckily I only damaged the front wing: the crew did a great job changing it and getting the car ready for the start of the race. Unfortunately our race didn't last long: we had a gearbox issue and had to retire the car. It was a day like this, the conditions were even trickier than yesterday and in the end luck was not on our side. I'm just looking forward to the next race."