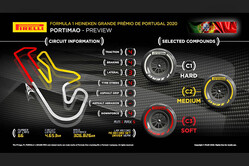 The up and down rollercoaster of Portugal's Portimao circuit in the Algarve is a brand new track to Formula 1. For Formula 1's first grand prix in Portugal since 1996, the three hardest tyres in the range have been chosen: C1 as the P Zero White hard, C2 as the P Zero Yellow medium, and C3 as the P Zero Red soft.

This selection has been made in order to cope with the heavy demands of the undulating circuit. Although it's a modern track, it has an old school feel.

Nobody knows exactly what to expect in Portimao for Formula 1, but Pirelli has some previous experience of the track in GT racing. Nonetheless, a conservative choice has been made by nominating the hardest tyres in the range – in order to cover every eventuality.

Although the race takes place in October, warm temperatures in excess of 25 degrees centigrade are still possible in the south of Portugal.

For the first time this year, there's a move away from the standard allocation of eight softs, three mediums and two hards. In Portugal (and Turkey next month), the drivers will all be given seven sets of soft, three sets of medium, and three sets of hard. This is to cater for the expected severity of these two tracks.

During the first half-hour of FP2 in Portimao, all the teams will test unmarked 13-inch prototype slick tyres for next year, according to a run plan to be defined by Pirelli. This will validate the development of tyres for 2021: the final season of 13-inch in F1.

The undulating track contains 15 corners and a long straight, with the final very long right-hand corner (Galp) putting a lot of energy in particular through the tyres.

There's quite a wide mix of corners: one of the reasons why Portimao was selected as an F1 testing venue heading into the 2009 season. The tyres are subjected to both lateral and especially longitudinal energy demands due to heavy braking, which will provide a considerable challenge. As usual with any new circuit, the data gathered in free practice will be vital in terms of establishing this information and formulating the right strategy.

The circuit is quite wide at up to 14 metres, which should help overtaking.

The track was completely resurfaced a few weeks ago so the new asphalt is an unknown: which could have different characteristics to the previous surface.

Mario Isola: "For the first time, we head into a double-header featuring two circuits that are new to Formula 1 in its hybrid era: starting with Portimao, which makes its grand prix debut. Although Formula 1 has never raced there before, we have some experience of this track through GT and world superbikes, which gives us a good idea of what to expect. It's an absolutely spectacular venue and we think the drivers will love racing there.

"Portimao is quite demanding on tyres and this could be accentuated by warm weather, which is why we have brought the three hardest compounds. We've also adjusted the standard tyre allocation this weekend, with the drivers getting an extra set of hard and one less set of soft. In FP2, the drivers will try out next year's 13-inch tyres for the first time during the opening half-hour of the session. As usual this will be a 'blind' test, so the drivers won't know exactly what they are sampling."