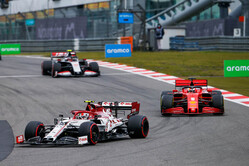 There are many points to reflect on as the dust settles on the Eifel Grand Prix, a race that gave us emotions at both ends of the spectrum from start to finish. We went from elation to heartbreak within a corner as both cars made massive gains at the start, only for Kimi to be forced off the track to avoid a rival just seconds later and lose his newly-found position.

We had overtakes, great defending, a few bits of carbon shed, as both Antonio and Kimi climbed the order to run in P8 and P10 ahead of the second round of stops, fuelling our dreams of a double-points finish. We saw those dreams dissolve as a late Safety Car hurt our chances to keep those positions - but so is the way of Formula One, sometimes. In the end, we bring home one point, another little step forward as we continue to make progress. A top ten finish, the second in three races, showing we are in this battle and we're not backing off.

The emotions started right at the lights. By virtue of making it off the grid today, Kimi Raikkonen is now officially the most experienced Formula One driver in the world, with 323 starts to his name. This illustrious record means he has now taken part in more than 31% of all Grand Prix events in history - nearly a third of all Formula One races ever.

We would have loved to celebrate this milestone with a point for the veteran Finn; alas, the racing gods had different plans. Antonio's fine P10 is still a reward for our efforts this weekend, one we will cherish - especially for the combative way the Italian fought his way through the field, defending his position all the way to the finish line.

Frederic Vasseur, Team Principal: "Scoring a point is always a positive result, but what is even more important is the way in which we have scored it. The team did an excellent job today, showing grit in difficult conditions and being ready to take the chances that we had along the way. We fought on merit with the cars we had around us, we kept behind a driver the calibre of Vettel despite the pressure he applied on Antonio for pretty much the whole of the race and we put in some good overtakes. The only regret is with that late Safety Car: we could have been on course for a double-points finish, but the shuffling of the positions it created meant we lost some ground with too little time to make it up. Still, to finish in the top ten for the second time in three races is a positive on which we can build for the rest of the season."

Kimi Raikkonen: "It wasn't the greatest weekend, but after yesterday we knew we'd have a difficult job on our hands. The start of the race was ok, but then I had to avoid some cars ahead of me and I lost a lot of places. We could have been a bit ahead but the Safety Car cost us a few position and the end result wasn't great. It was a frustrating weekend, but we have to leave it behind us and try again next time."

Antonio Giovinazzi: "I am very happy with today's performances, both mine and the car's. We did a very good race, keeping good pace from start to finish. We knew everything was going to be possible on such a day and that we could fight in these circumstances, so I am happy to bring home a point. I had another great start, making up a few places, then we managed the tricky conditions pretty well. I think we could and should have finished a bit higher, in P8, but the last Safety Car really hurt us as we lost places to Hulkenberg and Grosjean. In the end, though, finishing in the top ten was the target and we did it. It's a good confidence boost ahead of the next few races."