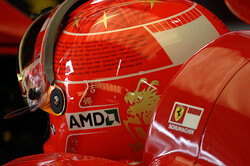 Not that long ago, Juan-Manuel Fangio's record of five world championship titles seemed to be the impossible dream. Admittedly, in the decades since those titles were won in the 1950s some had come close.

Then along came Michael Schumacher, and with the help of Benetton, Ferrari, Ross Brawn, Rory Byrne, Jean Todt and a couple of undemanding teammates all the old records were broken and a new seemingly impossible target set.

Then came Lewis Hamilton and Mercedes, and one by one Schumacher's records also have been broken, leaving just one or two more to be reset.

As the Briton cruises towards a record equalling seventh world championship crown, today he is likely to equal Schumacher's record of 91 Grand Prix wins.

Sebastian Vettel, an unabashed fan of the legendary German admits to being conflicted by Hamilton's achievement.

"Obviously we've spent a lot of years now together here," Vettel told Sky Italia. "He will never be Michael to me, so that's why a bit mixed in terms of emotions.

Meanwhile, Mick Schumacher, who is finally beginning to emerge from his father's shadow and reveal his talent in his own light, admits that Hamilton's achievement sets him his own target for the future.

"One sentence my dad always used to say was records are there to be broken," said the youngster, who is leading the F2 championship. "It's everybody's aim in the sport to do that. I think Lewis had a very, very good run - he had a very consecutive and positive run.

"Records are there to be broken," he continued, "and obviously from our side, I think we see it on a good side, too. It's good for the sport. He's been very influential in this sport too.