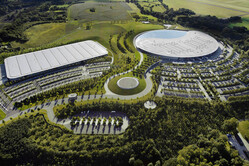 In a bid to raise cash, McLaren is putting its £200m Woking technology centre up for sale.

Sky News reveals that McLaren has instructed property agent Colliers to sell the MTC (McLaren Technology Centre), which it then wants to lease back.

The move is the result of the financial damage inflicted by the pandemic in terms of drastically reduced sales of its sports cars and falling revenue from its F1 team.

The Woking company's financial issues have been centre stage in recent times, and at one point the company went to court to block a group of bond holders who were blocking attempts to raise the cash against various assets, including the factory and the F1 team's historic car collection.

At the time, the bond holders insisted that those assets were already being used as collateral against existing loans and that they would lose out if the money owed by McLaren was no longer secured on the assets.

Facing the possibility of insolvency, McLaren was rescued by a £150m facilitated by the National Bank of Bahrain. However, it would appear the company - whose F12 team posted a £184m loss in the first half of the year - needs more cash.

"The potential sale and leaseback of our global headquarters and the appointment of banks to advise us on a debt restructuring and equity raise are part of the comprehensive refinancing strategy that we announced earlier this year," said a McLaren spokesperson.

"Building on the shorter-term measures that we put in place over the summer, these initiatives will deliver a stronger balance sheet and ensure that McLaren Group has a sustainable platform for long-term growth and investment.

"The proposed sale and leaseback mirrors best practice among leading companies and will have no impact on our day-to-day operations.

"The McLaren Campus, comprising the McLaren Technology Centre, McLaren Production Centre and the McLaren Thought Leadership Centre, is an iconic, world-class facility that will remain our home in the future."