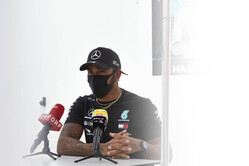 In recent weeks Lewis Hamilton has been hitting the headlines for things other than his bid for a seventh world championship title.

Spearheading Formula One's campaign to increase diversity in the sport, the Briton has also been extremely active in the quest to end racism.

However, some feel that his activism is distracting him from his day job, citing the mistakes that led to two penalties over the Austrian Grand Prix weekend, and losing out to teammate Valtteri Bottas as the season finally got underway.

Asked ahead of this week's second round, if his activism is a distraction and is causing him to lose focus, the Briton was in no doubt.

"I don't feel like I need to re-focus," he said. "I think if you watch the race, my race was pretty strong.

"I do naturally need to do a better job on the weekend," he admitted, "but I wouldn't say that I was distracted by any means.

"I continue to stay focused, as I was before, still focused on both trying to fight and win this championship, but also fighting for equal rights."

Ahead of last week's season opener, in a symbolic move which has been driven by the Mercedes driver, the majority of his colleagues joined him in 'taking the knee'.

Asked if there will be a repeat this weekend he was unsure.

"It was really encouraging to see (the Red Bull team) taking the knee," he added, "which I thought was great. So maybe, if we have time, there's something my team and I could do. It's just about time, there's not a lot of time before the race.

"I'm not against taking a knee again, so if I can find a way of making sure it doesn't get in the way of us doing our job, then I will."