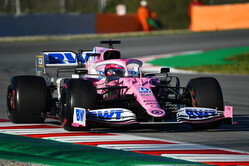 Other than the racing, the (eventual) decision to abandon the Australian Grand Prix meant we were robbed of two potential rows.

Other than Red Bull seeking to challenge Ferrari and the FIA, following the sport's governing body's handling of its investigation into the Italian team's 2019 engine, a number of teams, most notably McLaren and Renault, were set to protest Racing Point's car, which bears a remarkable similarity to Mercedes' 2019 contender.

Though the issue has gone quiet for now, should the Racing Points prove to be best of the rest in Austria in July - and again the following week - the protests are sure to follow.

However, the Silverstone-based outfit's technical director, Andrew Green, who has previously defended the influence the Mercedes had on his car - the first he designed for the team since Lawrence Stroll took control - insisting it is not a clone, reveals that prior to pre-season testing the FIA had given the RP20 the all-clear.

"We don't really know what the ground is that they are thinking of protesting about," he told Motorsport.com, in terms of the potential protests.

"When the car launched, we talked to the FIA about it, the FIA came round to the factory and looked at what we'd done and the designs of the car," he continued. "They even took the design data from Mercedes for last year's car and checked it against ours.

"They did a thorough check, and they are completely happy that the car that we've got on track has been designed by us. It may have some similarities to the Mercedes, but it's just similar. It's not the same. And so there is no protest there.

"They can shout and scream as much as they want," he added, "but I think what they're actually shouting and screaming about is the fact that they've missed a trick. And that's what they're upset about."

Freed of the financial restrictions during the days of Vijay Mallya, under Stroll, Green was able to start with a blank canvas.

"There was no obligation to carry over a single thing in 2020, where there always had been huge pressure up until that point to carry over a significant percentage of the car - depending on the sort of financial situation we were in. There was always significant carry over, and this year was the first time that we had a clean sheet and we could optimise what we were buying from Mercedes.