Horner: Customer cars can save F1 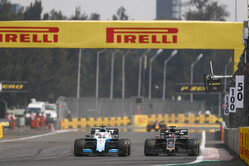 At a time we are still mourning the passing of Sir Stirling Moss, it is worth remembering that while he scored world championship wins with Mercedes, Maserati and Vanwall, a number of his wins were at the wheel of cars entered by Johnnie Walker whisky heir, Rob Walker.

Indeed, at the wheel of Walker's dark blue and white Coopers and Lotus', Moss scored a number of his most famous F1 wins, not least Monaco 1961 when he beat the might of Ferrari and its infamous Sharknose.

At a time F1 is facing possible "collapse", according to Ross Brawn, Red Bull boss, Christian Horner believes that a return to customer cars would be the best solution for the teams and indeed the sport.

Just days after Zak Brown expressed his fear that the sport could lose as many as four teams, and Claire Williams admits that going racing is financially "critical" for her team, Horner believes that the ability for smaller teams to purchase 'off the shelf' race winners could revitalise the sport and help ease its financial issues.

The Milton Keynes-based Austrian team, according to its latest filings, spent £118.1m ($145m) on research and development alone in 2018, around six times the amount spent by those teams at the back of the grid.

Indeed, the regulations which state that each team "must design and manufacture certain key parts of its cars itself, including the chassis, which means that each team’s cars are unique" have accelerated spending to the point where the average spend is around £190m ($233m) annually.

Horner, who, along with Ferrari, has argued against a 'one size fits all' budget cap, due to the fact that teams like his, Ferrari and Mercedes, incur extra cost in terms of the research and development they carry out on parts that are subsequently used by other teams, believes that the budget cap - currently set at $150m (£120m) - won't be enough to save some teams or improve the sport.

Indeed, rather than spending vast amounts in order to finish 3 or 4 seconds off the pace, Horner suggests that the smaller teams would benefit from buying their chassis from their more successful rivals.

"(It) would be the cheapest way to address their issue, their plight, and the quickest way to be competitive as well," he tells The Independent.

"You would save because you would just operate as a race team," he adds. "You would have a limited development budget so you could quite easily operate, I would have thought very comfortably, at $80 million (£64m)."

While purists will cry out in horror, other than the fact that the sport is desperately crying out for a hard re-set, though privately entered customer cars are considered to be the domain of the 50s, 60s and 70s, in the not too distant past Super Aguri fielded a couple of Arrows and then Hondas, while Toro Rosso looked no further than 'sister team' Red Bull. Indeed, the STR5 of 2010 was the first car designed by the Faenza outfit itself.

While such a move could cut costs by around 67%, F1's company documents state that a "fundamental difference" between F1 and IndyCar is that "unlike Formula 1, IndyCar teams are not required to be 'constructors' of their cars resulting in less diversity of technology as compared to Formula 1".

As recently as 2015, Bernie Ecclestone was pushing for the return of customer cars, however, leading the assault against such a move was Williams, which is somewhat ironic as it was a privately entered Brabham and then March which gave the team its initial steps on the F1 ladder.

The most successful British team in terms of constructors' titles, Williams is currently languishing at the back of the grid having finished last in the standings for the past two seasons. Recently it was revealed that the Grove-based outfit has secured a loan of at least £50m secured on its assets, including its factories and collection of historic race cars.

"Williams would be better buying a Mercedes and going racing," says Horner, who fears that despite the pleas coming from the teams in terms of reducing spending, they will still continue to pump millions into research and development that still won't be enough to move them up the grid.

As the teams bicker over whether the budget cap should be $150m, $100m or even $80m, Horner admits that customer cars are "probably a second stage".

"I don't think it's on the agenda today," he adds, "but I think it should be. You would have thought now would be the time to put this through but sometimes you can't save people that don't want to be saved."

Though Ecclestone failed in his bid to get customer cars back on the grid, the rules were relaxed somewhat, certainly enough to allow Haas to enter the sport using a chassis designed and built by Dallara.

Before the coronavirus so rudely interrupted the season, it was likely that Melbourne would see protests from some teams at the 'influence' the 2019 Mercedes has had on the (t)Racing Point.

Customer cars are "happening anyway," says Horner. "If you look at what Force India has done, or Racing Point or whatever they are called these days, rather than doing it through reverse engineering, just sell them the cars."