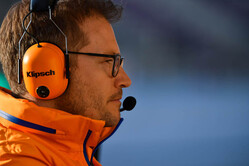 While some in F1 do not appear to be singing from the same hymn sheet, the same cannot be said of McLaren team boss, Andreas Seidl.

While the company's chief executive, Zak Brown has been warning of the dangers the sport faces unless spending is reduced and prize money divided more evenly for some time, Seidl, who has only been in place for just under a year is already fully on message.

Talking to BBC Sport, the German warns that the ongoing coronavirus has exposed the unsustainability of the sport.

"The crisis we are in is the final wake-up all that the sport which was unhealthy before and not sustainable has now reached a point where we need big changes, drastic changes," he said.

"I have to hope if we make the right decisions now that F1 can be more sustainable and in a better more healthy state than in previous years and then it improves the show."

Despite his strong words however, Seidl doesn't believe that F1 itself is in imminent danger, despite Ross Brawn's recent admission that it could "collapse".

"I don't see any signs F1 will not exist next year," said the German, ahead of an online meeting of team bosses on Thursday to discuss matters such as the budget cap. "The biggest risk is we lose teams if we don't take decisive action tomorrow.

"It is important we put all these actions in place to do maximum money saving this year and then a lower budget cap to make a sport that is healthy and sustainable from the financial side."

Echoing Brown's fears that the virus and the consequent uncertainty over the season could see teams fall by the wayside, he said: "It is not just a fear, it is reality, there is a big risk we could lose teams through this crisis.

"We don't know what the income will be, we don't know when will get back to racing. We all hope we can do as many races as possible.

"There is a big desire from the public that sporting events happen again, even if it is just on TV," he continued. "But there are a lot of different aspects that need to be considered.

"The most important thing is to protect our people, so definitely we can't go back until we know our people are safe. Then it will depend on the guidelines of our home countries first of all - the travel guidelines, for our daily life - and we need to see if that allows us to travel out and back again. We need to wait and see what the different counties where the races should happen are deciding, and then we need to see what the promoters are deciding.

"If there are changes of dates, promoters need to be up for it and it needs to make sense from a commercial point of view. And then I think also what is important is the public acceptance of events happening again.

"It is important we only go back racing once we also have certainty that when it comes down to protective equipment (for medical staff), the number of tests for people, that this is all in place and available for the people who need it and we are not burning these tests just go back racing."

Asked about the budget cap, he admitted: "We would like to see the budget cap as low as possible. We have put out the number of $100m, which is something we would be in favour of, but we understand it invites a lot of different teams with different sizes.

"So I'm looking forward to the next meeting which we have tomorrow afternoon and then hopefully we come to some big decision soon."