Allison pays tribute to Mercedes for its faith in him 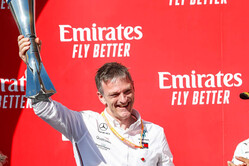 Mercedes technical director, James Allison has paid tribute to Mercedes after the German team offered him hope at one of the lowest points in his life.

The Briton admits to being "something of a wreck" in early 2016 when he lost his wife, Rebecca to meningitis.

"I am still grieving today four years on," he admits in an interview for Mercedes, "but then I was crying in the car on my way into work and crying on the way home.

"I didn't know what the right thing to do was," adds the 52-year-old, who was working for Ferrari at the time, "at the time most of me was just wanting to crawl into a hole and never come out again.

"But Toto gave me this opportunity and I hoped that as time passed I would start to feel like I would want to re-engage with the world, and by the time I was walking in the factory gates at Brackley I was feeling a little stronger and a little more useful.

"I was able to get a sense that despite the pain of losing Rebecca that there was still some use in me. As the weeks rolled by and turned into months and eventually years that gamble that Toto took on me I hope I have repaid by being useful."

In 1999 he joined Ferrari as trackside aerodynamicist, a vital role during the Scuderia's 'golden era', continuing with the Maranello outfit until 2004.

He returned to Ferrari in 2013 as technical director, but left midway through 2016 shortly after the passing of his wife. In 2017 he joined Mercedes, in time to help guide the German team to its fourth constructors' title.

In his time, Allison has worked with a number of champions, including Michael Schumacher, Kimi Raikkonen and Fernando Alonso, but the Briton has particular admiration for Lewis Hamilton.

"He is one of the oldest drivers on the grid now, and still drives like one of the youngest," he said. "But in a career of multiple championships and countless wins, you will struggle to find a moment on the track where you will see Lewis do something ugly.