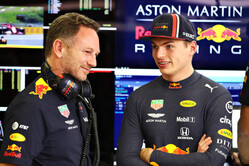 Last season, as if proof were ever really needed, Red Bull made clear that it isn't above making controversial decision in terms of its drivers.

Having previously dropped Alexander Albon from its driver programme, much like Brendon Hartley, when the need arose the Thai youngster was hurriedly brought back into the fold. Indeed, when Pierre Gasly proved to be all at sea alongside Max Verstappen, Albon was promoted to the 'big team'.

Heading into 2020, Albon, more than anyone else, knows that he must continue to raise his game, for if he doesn't, as has happened so many times before, the axe will fall.

However, with Red Bull on the ascendant, and the likes of Lewis Hamilton and Sebastian Vettel possibly to become available, Christian Horner isn't interested, for it is in Max Verstappen in which he and his team places its trust.

"He wouldn't fit into our programme," said the Briton, when asked about the six-time world champion. "We have Max.

"We have always taken the policy of investing in young talent, nurturing and developing that talent," he added. "Lewis doesn't fit into that."

Asked about Vettel, who won his four titles with the Austrian team, Horner replied: "It's difficult to see how two alphas can fit in a team. You can see the problem that Ferrari have had. Why would it be any different at Red Bull with two alpha drivers? Same with Lewis at Ferrari or Lewis at Red Bull. That is a very difficult dynamic, especially in a tight competition."

As speculation over Hamilton's (and Mercedes) future plans continues, Horner believes that the world champion will stay put.

"Two of the major seats are now filled," he said, referring to Verstappen and Charles Leclerc. "Logic would say that he'll remain in his current team if they can agree terms.

"All the automotive sector has financial pressure at the moment," he continued, referring to claims that the stumbling block for Hamilton could be his pay demands, "so when there's redundancies being made I guess it's difficult to justify record-breaking salaries. I would assume it will be a normal commercial negotiation between the driver and his team.

"Ferrari could be a possibility for him," he added, "how much is difficult for me to gauge. He seems happy in the environment he's in. If it's the most competitive environment, why would he want to change that for the sake of driving in a different colour? I don't subscribe to that theory."

Looking ahead to the coming season, he said: "The likelihood is that Max is the one most likely to have a go at Hamilton, and that's inevitable.

"There is always another wave coming," he continued. "Max is the coming man. He is 22 years of age; he is in the ascendancy. Lewis is, what, 35?. It is inevitable in any sport, there's always another generation coming. And, with Max and Leclerc and the other youngsters coming along, Formula One is set for a really thrilling year."