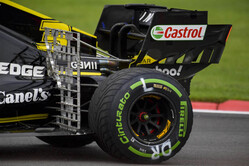 Although conditions were cool and slippery all day following some overnight rain (with track temperatures never exceeding 39 degrees centigrade) Ferrari driver Sebastian Vettel's fastest FP2 lap on the soft C4 compound was slightly quicker than last year's equivalent. This was despite a tyre selection that was harder than last year (when hypersoft was the softest nominated tyre).

The overnight rain meant that many drivers started FP1 on the intermediate tyre, in even cooler conditions. This was also to take advantage of the regulations, which allow an extra set of tyres if Friday practice is declared wet and a set of intermediates is used. The cold and slippery track meant that there was a bit of graining in the morning, which was reduced during the afternoon with more rubber on the track.

Both sessions were interrupted by quite lengthy red flag periods, which meant that teams couldn't quite get the full three hours of free practice allocated for Friday.

Similar weather conditions are expected tomorrow, with some possible overnight rain in store, which could wash away the rubber laid down today.

As expected, the high altitude in Mexico affected grip as well, as in the thin air the cars generate less downforce.

Up to now, the performance difference between the medium and the soft is around 0.9 seconds, with 0.6 seconds between medium and hard (but the data for the medium-hard comparison is less representative).

Mario Isola: "The gaps seem to be reasonably close between the top cars on the same tyre, accentuated by the relatively short lap length and the fact that the running has been interrupted today. This meant that nobody really had the chance to find any particular advantage. With more rain possibly expected tonight, the grip might not significantly improve tomorrow. The graining we saw this morning was no real surprise given the cool and damp conditions combined with the lack of aerodynamic grip, which meant that the cars were sliding more than usual. Despite this, the actual lap times were comparable to last year - and with a harder tyre selection. There's clearly some degradation on the soft at the moment in particular, but a lot will depend on the eventual weather conditions for race day. Plenty for the teams and drivers to think about overnight, as starting the race on the medium tyre could be a valid strategy this weekend."