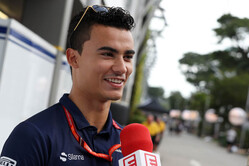 Monaco-based, Monaco Increase Management (MIM), which has links to the Campos junior squad, has released a statement announcing its hopes to enter F1 in 2021.

"The team is now at an advanced stage of negotiations with current Formula One Teams and engine manufacturers to ensure the best possible partnership for a competitive Spanish Formula One team from 2021 and onwards," it read.

Seemingly, discussions have already been held with F1 boss, Chase Carey and Ross Brawn, while in August, Brawn said that due to the new rules proposed for 2021, which include a budget cap to limit spending and a more equal division of the prize money, there had been a "a surprising number" of enquiries from prospective teams.

"From the first meeting with Chase Carey at the Spanish F1 Grand Prix in Barcelona on May 11th, and through the following meetings at F1 Group Headquarters in London with Ross Brawn on May 15th, and July 31st, it was clear that a Spanish team would fill a void left by the retirement of Fernando Alonso, and increase the interest of the Spanish fans and the TV and Media audience," said the MIM statement.

The statement revealed that the project is "now at an advanced stage of negotiations with current Formula 1 teams and engine manufacturers to ensure the best possible partnership for a competitive Spanish Formula 1 team from 2021 and onwards.

"Joining the Formula 1 World Championship in 2021 shall be a long-term project," said Campos CEO Salvatore Gandolfo, founder of the Vexatec company that produces data-tracking sportswear.

"We are aware of the big challenges ahead of us, but we have a team of experts working day and night and the financial solidity required by the FIA to make this project a success.

"With the new budget cap, the new distribution of incomes and the new technical and sporting regulations, there is a great opportunity for smaller teams to compete and ultimately to make the FIA Formula 1 World Championship more interesting and balanced again."

Of course, it was the rules overhaul that attracted three new teams in 2010, the sport aiming to introduce a budget cap as well as cheaper engines.

One of the teams due to enter F1 at that time was Campos Meta, which was founded by former F1 driver Adrian Campos. However, unable to find the necessary funding, the project was sold, the new buyers entering F1 first as Hispania, and then HRT F1. The other new teams encouraged by the rules overhaul, Tony Fernandes' Lotus and Virgin, lasted a few years, albeit with new identities, before they went the way of so many before them.

With a question mark over the futures of at least three existing teams, one wonders whether Campos might be looking to buy one of these operations.

Pascal Wehrlein is one of two drivers linked with the project, the other being Alex Palou, both of whom are managed by MIM.

Campos is currently contesting the F2 and F3 championships, with Renault test driver, Jack Aitken fifth in the F2 standings, while Palou is third in the Japanese Super Formula. Wehrlein, a Mercedes protege, who raced in F1 for Manor and Sauber, parted company with Mercedes in September 2018, was recruited by Ferrari as a simulator driver in February.

It is understood that Peter McCool, formerly with Super Aguri, has been recruited as technical director and Ben Wood, formerly Super Aguri and Brawn GP, as chief aerodynamicist.