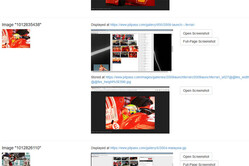 On 16 September we received an email regarding copyright infringement.

When we say, "received", we actually mean that because it came from a suspicious email address that contained meaningless letters and number it went straight to the spam folder, and it was only when another email arrived on 30 September that we became aware that there was an issue and we discovered the original email. If you get our drift.

"ImageRights International (www.imagerights.com), headquartered in Boston, MA, is a copyright and licensing agent to professional photographers, photo agencies, media companies and publishers who discover unlicensed uses of their works," it declared.

"ImageRights has been directed to pursue this claim," it continued. "If the images were licensed under an alternate company name (dba) or in the name of a third party, please reply to this email with information on the sales order, invoice or other pertinent licensing information."

"However, if a valid license for this use of the images does not exist, a fee of £3,650.00 is required to resolve this matter. This amount has been calculated based upon the latest recommended fees for Commercial and Business online use of photographs from the National Union of Journalists," we were warned in bold letters.

"As the owner of the site, you are liable for the unauthorized use in the absence of a valid license, including cases in which a website designer, employee or intern is responsible for the inclusion of these images on your website. If your use of these images without a license was unintentional, for example if the images were found on the Internet and believed to be available for free use, it is still in violation of copyright law (Copyright, Designs and Patents Act 1988 (UK), Section 26) and ceasing use of the images now will not release you or your organization from liability in this regard.

"It is important that you respond to this letter to clarify if a valid license exists or to discuss payment of the outstanding license fee. ImageRights would also advise that you refer to the Practice Direction related to Pre-Action conduct as laid out at http://www.justice.gov.uk/courts/procedure-rules/civil/rules/pd_pre-action_conduct.

"1. Review the case documentation, including a screen shot of the infringed image(s) displayed on your website.

"2. Once you have reviewed the documentation, confirmed that a valid license for this use is not in place, and reviewed the Settlement and Release Agreement, then please select Request Invoice to Resolve Claim.

"3. Once you have removed the infringing uses of the image(s) from your website, please confirm by replying to this email," it concluded.

In the body of the email Image Rights helpfully published a thumbnail of one of the illegally downloaded pictures, but it was so small, we were unable to gather any further information.

However, ImageRights included a link to a page on its own site which featured the pictures in question, around 73 in total.

Now, some, if not all of you, will be saying; 'you got caught, you downloaded pictures that weren't yours, quit moaning and pay -up'.

However, while convinced that we had never knowingly downloaded pictures illegally, we checked the gallery on ImageRights' site.

The pictures in question cover a wide period, from around 2004 to as recently as 2018.

However, as we checked through the seemingly endless catalogue we realised that every single picture had been downloaded from the respective team media site to which we had access - in some cases from when Pitpass first went online in 2002.

These pictures were/are made available to the media, who apply to the relevant team for access, and who, on being approved, are given the necessary log-ins.

Use is restricted to editorial use, with strict rules that the pictures are not to be used for commercial purposes or such things as as screensavers or wallpapers.

On 1 October we replied to ImageRights stating: "We have looked at the link you sent, and the example shown in your original email. This image was legally downloaded from the team's media page at the time (13 03 2010) with full permission, as do all of our images."

"Normally this image needs to be licensed," came the reply. "Please send me the link to the page in question so that I can send this to our client for review."

Unfortunately, the image in question was from the long defunct Caterham/Lotus team, its website, like the team itself, no longer in existence, therefore no such link could be provided.

Consequently, in response to the request for the link we wrote: "To be clear, the F1 teams give access to these pictures to those publications they approve, and in most cases we have been registered since the very early 2000s.

"Looking through the images in question on your website, and noting your comments, you appear to be suggesting that the teams are offering images to the media without a license for usage, which would be a very serious matter not only for the publications but for the teams.

"If this is the case we shall need to start contacting the teams, as it clearly they who are at fault, as we downloaded the images in good faith."

"Our client has requested the links to the pages you mentioned you got the images from," came the reply from ImageRights. "Please send these to me so I can present these to our client for further review." 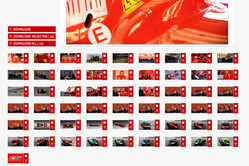 In response, in relation to pictures ImageRights claim were illegally downloaded and shown on their own site (pictured top right), we sent the link to the gallery (pictured right) on Ferrari's media site for the launch of the F60 in 2009, which, ironically, ImageRights won't be able to open as it doesn't have the required log-in.

To be clear, as of today (3 October 2019) the entire 2009 launch gallery is still available on Ferrari's media site for download by the media, though ImageRights state that the use of these images is a breach of copyright.

Other pictures we are said to have downloaded illegally came from the likes of the McLaren, Toyota, Honda, Brawn and Williams F1 teams, Pirelli and the FIA.

So, as we said in our response to ImageRights, if the pictures we have downloaded shouldn't have been downloaded because they were copyrighted and we have therefore downloaded them illegally, why have the teams made them available. Indeed, why are they still making them available, because such images were available from all the teams as recently as last weekend in Sochi.

Indeed, Mercedes, Ferrari, Renault, Racing Point and Pirelli are even kind enough to include a few high-resolution images in their email updates at the end of each day of the Grand Prix weekend. For which, by the way, we thank them.

The client of ImageRights, in case you were wondering, is MotorSports Images, part of the increasingly powerful, Motorsport Network, of which, Miami-based, Mike Zoi is the driving force and of which, McLaren Racing CEO, Zak Brown, is a non-executive chairman.

According to Wikipedia; "Motorsport Images is a racing and automotive photo and technical drawing archives with over 23 million assets under management.

Motorsport Network acquired LAT in October 2016 when it bought Haymarket, the company behind Autosport, going on to buy Suttons in April of the following year.

Other that what appears to be total domination of the photographic side of the sport, Motorsport Network has branched out into various other areas including clothing, art, models, streaming, memorabilia and is even the official supplier of the FIA's motor sport results and statistics database.

As far as we are concerned the pictures downloaded from the team's media sites were copyright free, and we have not breached any rules. Indeed, though the pictures in question date back to 2004, in all that time we have received no "polite requests" far less threats, that we have done anything illegal.

Indeed, in the many years prior to their acquisition by Motorsport Network, neither Haymarket, LAT or Suttons, had the need to contact Pitpass regarding a breach of copyright of their assets.

Interestingly, on 19 September, IPPro magazine revealed that Motorsport Network had chosen ImageRights', which was incorporated in April this year, according to Companies House, "image search and copyright enforcement services to support its Motorsport Images photography agency".

"By creating a unique identity for each individual image, ImageRights searches the internet to locate websites where the images have been used for untoward commercial gain. It then analyses the newly discovered image sightings to predict which uses are the best candidates for taking legal action.

"ImageRights' recovery service will then support the firm in pursuing these copyright infringement claims."

"We are immensely proud of our photographers and the work they continue to produce, which is why we had to take action against image misuse," said James Claydon, managing director at Motorsport Network, who is personally named in the claim against us.

"Not only do our images make us entirely unique, but they also are part of our identity, and ImageRights has empowered us to say enough is enough when it comes to copyright infringement."

"While the internet, alongside other technology, gives companies like Motorsport Images an opportunity to showcase their work, it has also opened a can of worms when it comes to image misuse," added Joe Naylor, CEO of ImageRights.

"To be working with Motorsport Images extensive image catalogue is an exciting proposition and we are determined to get Motorsport and its photographers paid for their work."

While Mr Claydon believes that Motorsport Images' images are "entirely unique", the fact is that in some cases now, and certainly over the years, the teams have made these available to the media, seemingly without permission.

Pitpass, like many others has used these pictures in good faith only to be now told that they have done so illegally.

Furthermore, with an archive of over 23 million images, it is not just Formula One that is in question, and if 73 such images are illegal, there is surely the potential for claims in terms of thousands (millions) more against all manner of media outlets.

On a final note, it is said by some that having created the Motorsport Network empire, Zoi is looking to sell.

On the other hand, with almost total domination of various aspects of the sport, and having acquired much of the major competition, what better way to get rid of the small fry.

If ImageRights and its client, Motorsport Images, is claiming that pictures have been downloaded and used illegally, then surely it must be planning to deal with the teams, and even the FIA, since they have made the images available in the first place.

If nothing else, it will be interesting to see how Zak Brown reacts, what with him having a foot in both camps, so to speak.