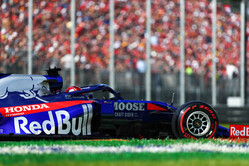 Daniil Kvyat: "Unfortunately, today wasn't representative of our true pace. On the last lap in Q2 we caught quite a few cars and it became quite messy. I had a lot of traffic on my lap, where cars ahead were making mistakes and aborting their runs, and even coping with that, I still almost made it to Q3. It's a shame because I think we had Q3 within reach and we just made our life more difficult. We tried something different but it didn't work, so it's a good lesson for the future. It's not going to be easy but we will try as always to get into the points tomorrow. Our race pace didn't look too bad yesterday and our package looks quite competitive here, so if we prepare well and have a race like we had in Spa we should hopefully be on for a good result, to make it up for today."

Pierre Gasly: "It's been a positive Saturday for us. As we have the penalty this weekend, we focussed on the long run this morning, trying to get a good read with the car on high fuel. However, we decided to give it a go in Qualifying to see what we had. I felt really good in the car and we were quite competitive, finishing ninth-quickest at the time. In Q2 we fitted the used tyres from Q1 to get some laps in, as we knew we would start from the back of the grid. The car has been pretty good all weekend and we've shown good pace so, even with the penalty, I think we will have our chances in tomorrow's race and I'm excited to see what we can do."

Jonathan Eddolls (Chief Race Engineer): "The track conditions were slightly different compared to those we had yesterday, so we had to modify the setup to try and maintain the competitiveness we showed yesterday. We made several changes to the cars to adapt to the track, I think the FP3 performance shows that they were working well and the car was looking quite capable. We knew it would be tight to get into Q3, but there were signs it was possible if everything had gone to plan, although normally you would need a tow. Every session of today's Qualifying was a challenge for every team. Particularly in Q3, trying to get a tow in the end cost eight cars, as they could not get a final lap because they were focussed on getting a slipstream. There were lots of cars on track in Q1 so it was difficult to get a good position, but we managed it, with both cars going through to Q2. Everything was going well but then we elected to deviate from the original plan trying to give Dany a bit of an extra hand to get into Q3. However, this didn't work and we ended up P13, with Pierre P15. That was disappointing as I think Pierre had a car that could out-qualify Norris, and now we'll start behind him on the grid, which is unfortunate. On the positive side, the car was showing good pace on the long runs so, even though we're not starting where we wanted to be, let's hope we will be able to repeat our strong performance from Spa last weekend."

Toyoharu Tanabe (Honda F1 Technical Director): "As always in Monza, qualifying was exciting and very close, with teams using slipstreaming tactics to gain lap time. Kvyat was unable to get further than Q2, not getting a clean lap. Even before the start of the weekend, we knew that Verstappen and Gasly would be starting from the back of the grid, in order to switch to our Spec 4 PU. Overtaking is not too difficult at this track, so we expect all four of our cars to have a strong race tomorrow."