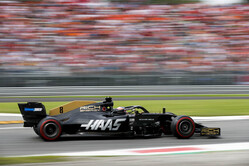 Rich Energy Haas F1 Team drivers Kevin Magnussen and Romain Grosjean qualified 12th and 16th, respectively, for Sunday's Italian Grand Prix, the 14th round of the FIA Formula One World Championship at Autodromo Nazionale Monza. Grosjean will start the Italian Grand Prix from 14th after Lando Norris of McLaren, who qualified 14th, and Pierre Gasly of Toro Rosso, who qualified 15th, move to the back of the grid for unapproved engine changes.

In Q2, Magnussen improved his time by one-thousandth of a second but missed a position in the top-10 and the chance to advance to Q3 by one-tenth of a second. His lap of 1:20.615 was 12th on the timesheet.

Romain Grosjean: "Very much disappointed not to make it through to Q2 today. The car was actually better than it had been in FP3 and in the corners I was fast. Just compared to Kevin (Magnussen) though we're lacking a lot of top speed, I don't know why, but it costs you a lot of lap time. My lap was good, I had a bit of traffic through turns four and five, I probably lost a bit of time there, but every other corner I was fast. It's just very disappointing not to have gained more in a straight line, I was using the slipstream as much as I could. We need to look into everything."

Kevin Magnussen: "It was about as good as it could be today, but Q3 was only about a tenth away, and you always feel like you could have taken that. I got out behind Albon, who was much quicker than me, so he pulled away and I only got a tow for half a lap - because then he was gone. That's how it is. We got more-or-less everything out of it that we could. We've seen before that the car drops in race pace, but we can just hope it doesn't do that tomorrow. Friday looked a little bit positive, so we hope that's going to carry into tomorrow and be the same again. We're not far from the points. If we have a decent race car we can go for it."

Guenther Steiner: "It's not a big surprise that we qualified where we did after the earlier free practice sessions. We tried to set the car up so that in the race, we can race. Hopefully we can get that one done. Starting 12th and 14th is not fantastic, but it doesn't mean that we're out of the points in the race. We'll focus on it and hopefully we can get it done."