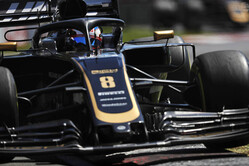 The 14th round of the 2019 FIA Formula One World Championship began with practice Friday at Autodromo Nazionale Monza as teams prepared for Sunday's Italian Grand Prix.

Rich Energy Haas F1 Team drivers Romain Grosjean and Kevin Magnussen took to the track in the wet FP1 session on Pirelli P Zero Blue rain tires before switching to Green intermediates. Both completed just seven laps during the session, which was red-flagged multiple times for incidents. Magnussen's best lap of 1:34.715 on his sixth tour of the circuit was 14th on the timesheet, while Grosjean's best of 1:35.980 came on his seventh and final lap and was 16th overall.

FP2 began in dry conditions before light rain returned and persisted throughout the last hour of the session. Both Haas F1 drivers began the session on new Yellow medium tires before switching to Red softs, on which they set their best laps. Grosjean's 1:22.153 was eighth overall and came on his 12th lap while Magnussen's 1:22.511 came on his 11th lap and was 13th. It was a productive remainder of the session despite the conditions as both drivers made high-fuel race-simulation runs, beginning on softs and finishing on mediums. Grosjean completed 44 laps and Magnussen 42.

Romain Grosjean: "It was pretty good actually. The afternoon went well. In the morning, we just tried a little bit on the intermediates - I don't think we were very competitive, the settings were not fully adjusted for the wet conditions. The afternoon was a surprise to be fair, I wasn't expecting to be that comfortable in the car. The pace of the car was good, the feeling in the car was good, it was enjoyable. We did a long run, so I was happy with that. It's been a good day, hopefully that carries on tomorrow."

Kevin Magnussen: "It was good today, we got to try both wet and dry conditions. It seemed okay in both. It was a little bit messy with times, so I'm not putting too much into the classifications. The feeling was good on the long run, it went well. The car actually felt good and had some grip. It was nothing crazy but still pretty good. Overall, not a bad day."

Guenther Steiner: "FP1 was obviously a little disrupted because of the rain. The only thing you could really do was try to learn how the intermediate and the wet tires work. No conclusions taken from there. FP2, by being mostly dry, we got some proper testing in. We're pretty happy with the laps we got in and the lessons learned. Hopefully we can get a good set-up together for tomorrow."