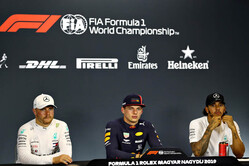 Question inaudible
Max Verstappen: It's incredible! This one was still missing. The car felt good all weekend and then of course you know it's always going to be hard in qualifying but we managed to do it and of course a big thank you to the team. The car was flying out there in qualifying. It was incredible.

If you'd saw how nervous the garage was when you went out for that last run, but I guess when you hear on the radio that you've actually nailed that, it's just growing isn't it, the confidence with there, and tomorrow you're in a great position with that.
MV: Yeah, absolutely. Very happy about today. Still a race to do and that's at the end of the day the most important, but for me today was an important one, a very nice one and also a great one for the team.

The Dutch travel in form and you can hear when you drew up... ?
MV: They're loving it!

...You had the engine noise but you could hear them. You've lifted this place. Max, congratulations. Valtteri, you nearly got the job done. I guess after last weekend, Max pulling out a great lap, but you came close and you're in a good position.
Valtteri Bottas: Yeah, I've been kind of chasing a little bit this weekend after missing pretty much all practice one, only limited laps in practice two, and I only really started to get into the rhythm this morning. It was getting better and better in qualifying and I'm pretty pleased with the lap in the end. Very close with Max, they've been quick all weekend, but, you know, as always it's tomorrow that counts.

Can you still win this race from the position you're in?
VB: Of course. We are here to fight for the win. There's lots of support for that, so that's going to make a difference.

All the best. Lewis, third position. I guess you would say it's been a difficult day after your form in qualifying normally. But I guess Max pulling out a great lap, Valtteri there as well, are you happy with where you ended up?
Lewis Hamilton: Naturally we're always targeting first. Max did a great job and so did Valtteri. It kind of got away from me a little bit once we got into qualifying but still we're in a good position to fight for the win, so we'll just be pushing hard tomorrow.

These guys are starting to ramp up the pressure now, Ferrari were very close as well, the Red Bull. Are you relishing this fight that they're taking to you?
LH: I'm always down for a fight so...

I guess you'll have to pass some cars tomorrow to try and get this win?
LH: Yeah, I think it's obviously a long, long way down to Turn 1, so it will be interesting. It's not the easiest place to overtake, but strategy will come into it tomorrow, so I hope we can give them a run for their money.

Max, what an exciting moment for you. You've had a few minutes now to digest it, how does it feel?
MV: Yeah, it feels good. I think the whole weekend already the car was very competitive. Of course there's always a bit of a question mark how it's going to work out in qualifying when we know that they can turn up a bit more power. But we seemed to hang in there and the car actually got better and better throughout qualifying. I was very happy with it, very pleased. It was really enjoyable to drive. I didn't really have any comments throughout qualifying, I just said 'keep it going, keep the car going and give me new tyres' and that's exactly what we did. Of course to get your first pole is very nice but it's of course what counts on Sundays always.

Well, you've been brilliant on Sundays, you've had seven wins. What's the overriding emotion now that you've finally go this first pole?
MV: People will stop asking me that question. Yeah, I guess so. For me it never really mattered. I knew it was a matter of time. You need a bit of luck sometimes as well. Of course, I made mistakes myself to miss a pole position shot. And today we got it, so very happy with that.

Many congratulations, well done. Valtteri, it's been a difficult build up to qualifying for you, with very little running in practice yesterday. How was the car this afternoon?
VB: Yeah, it's been not the easiest of weekends so far. I missed the whole of practice one, I had no track time, and I obviously very limited running in practice two. So this morning it was really important in practice three to find the rhythm and it was really getting better and better. I was getting the confidence in the car. Luckily there were no big set-up issues and I could just fine-tune it for qualifying. And again in qualifying, just learning each lap more and more and it started to feel very nice in Q3. It's a shame to miss the pole by such a small margin, always, but congrats to Max and to Red Bull, they've been strong all weekend. But on how the weekend started, in that sense, I'm quite happy with that, but obviously a lot happier sitting in the middle.

Thank you and well done. Lewis, you came into the qualifying session seeking your seventh pole position here in Hungary. You're lining up third. Just talk us through it?
LH: Firstly, congratulations to Max. It's an amazing feeling to get your first pole position, so really happy for him. For me a difficult qualifying session. Practice was going quite well. We knew the Red Bulls were quick - they're always quick here. I think when I got into qualifying the car wasn't the same as it was in P3 and it just was a bit of a struggle from the beginning and it kind of just plateaued there. It didn't really get any better. But nonetheless we're still there in the fight and hopefully for the race we'll have better race pace than I did in quali.

(Dan Knutson - Auto Action and Speedsport) Max, you have a powerful engine but I think at the start of the season the chassis wasn't really optimum. How much has the chassis improved from Spain testing to here?
MV: I never said it was only the chassis, I think it's a bit of both where we were lacking in the beginning. We made good gains with the engine, but we're not where we want to be and I think everybody knows that. But we are pushing hard and we are improving and we are getting close to Mercedes and Ferrari, especially Ferrari, they seem very quick on the straights. With the chassis I think since Austria where we introduced a few crucial updates I think the car has been a lot better. From there onwards we kept bringing new parts. Maybe not as major as that one but it always gave me more of a balanced feeling in the car. And that's exactly what we were looking for in the car and I guess it shows today on a track where you need a lot of downforce that the car was working really well.

(Vladimir Rogovets - Sb Belarus) My question to Mr Hamilton. Lewis, seven years ago you were here the winner but 2012 we had six champions in the peloton and you were only a one-time champion. Today we have only three champions in the peloton and you are a five-time champion. Do you think tomorrow, will it be easier for you to win than seven years ago - or not?
MV: I didn't know we had a peloton...

LH: Did I win 2012? I don't really remember that far back. Competition-wise, I don't think it makes any difference, I don't think, between those years. We've got some fierce competition within the top three teams. Is it easier now to win than before? I wouldn't say so. It's different circumstances now, naturally, and with more experience hopefully you are slightly prepared that I was back in... I would hope I'm better prepared than I was in 2012 but you're still fighting an uphill battle all the time. You're always finding new circumstances each weekend. This weekend, it started out well and it's not gone great today but that doesn't mean tomorrow can't go great.

...but you have more experience?
LH: So, hopefully we'll see that play its role.

(Scott Mitchell - Autosport) Max, by getting the breakthrough pole position for yourself and Red Bull with Honda, what message do you think that sends? Obviously you've made it clear that qualifying is the area you think you need to improve. And to the two Mercedes drivers, obviously you won't take your eye off the challenge from Ferrari but do you think that Max is now your nearest, most consistent challenger?
MV: We know that, if you can start more upfront in the race, it all makes it a bit easier to control a race - but we kept working really hard to improve the engine, to get a bit more out of it in qualifying, and I think that showed again today - that we were able to push it a bit more but of course within the limits of not blowing up. We keep improving. There are positive things also coming in the upcoming races. Of course, very happy to get my first pole position but also with the team, how quickly we turn things around from the beginning of the year where we were clearly lacking and now we are definitely closing up. And this weekend we were there, so that was good.