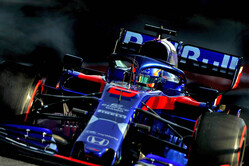 In the space of 24 hours, Alexander Albon has brought two new partners to Toro Rosso.

On Monday, Moose, Thailand’s premium apple craft cider, announced Albon as its first ever brand ambassador as part of a new partnership with the Faenza outfit.

As an official partner to the team the Moose logo will feature on both drivers’ race overalls, the STR14s and on Albon's helmet from the German Grand Prix onwards.

"This partnership demonstrates the full commitment from both Moose Craft Cider and the Red Bull owned F1 team to support Thailand’s motorsport ambitions on a global stage to further develop grassroots motorsport and to empower young people to follow their dreams," proclaimed the press release.

Today, at an official press conference in Bangkok, PTT Lubricants, a brand under the management of PTT Oil & Retail Business Public Company Limited (PTTOR), announced that Albon will be its brand ambassador as part of a new collaboration with Toro Rosso.

As official partner to the team the PTT Lubricants logo will be featured on both Albon and Daniil Kvyat’s race overalls and the STR14 cars from the German Grand Prix onwards.

In a season which features a number of rookies, Albon has regularly impressed, both on and off track, and should Pierre Gasly fail to raise his game it is not impossible that the young Thai driver could find himself promoted to the 'big team' for 2020.