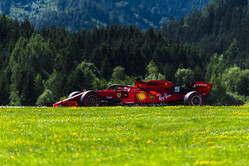 Plenty of work for Scuderia Ferrari during the three hours of free practice for the Austrian Grand Prix, with the team preparing for qualifying and the race, as well as carrying out a lot of data acquisition work aimed at establishing the direction for ongoing development of the SF90.

In the morning, Charles Leclerc and Sebastian Vettel only used the Medium Pirelli tyres, working on a programme that involved fine tuning the cars for qualifying and the race, as well as evaluating some components aimed at gathering data. Sebastian did 23 laps, the best in 1:04.982, which put him second on the time sheet. Charles did 26 laps on his way to fourth place with a 1:05.141.

In the second 90 minute session, Leclerc and Vettel started by evaluating the Medium and Hard tyres respectively. The session was red flagged a couple of times because of accidents and so, when it came to simulating qualifying, there was only time for one short run. Sebastian and Charles both fitted the Softs for this, but the German made a mistake at the final corner, locking up and having to abort his run. Charles meanwhile posted a time of 1:05.086, which turned out to be the fastest time overall of the session. Sebastian's best lap was a 1:05.871, good enough for eighth.

Charles Leclerc: "Overall, we had quite a productive day and completed a lot of tests around the set-up. The feeling in the car was good. It was a bit tricky with the wind changing direction, especially in FP2, which made it more challenging to predict what would happen in the corners. Although we have been fast today, we will work hard to take another step forward. On my side, as I did in France, I also have to focus on setting up the car in the best way to follow the track evolution in qualifying. I think we made the best out of it and I look forward to seeing where we stand tomorrow."

Sebastian Vettel: "My off-track excursion didn't have a big effect on our programme, other than that we couldn't do the long run on the softs. I was able to stop in time and did not damage the car. We are still trying a lot of things and getting closer. Hopefully tomorrow we can do better than today. It was a bit tricky in the afternoon with the windy conditions. We didn't actually try new updates, we ran the same parts as last weekend to be able to learn more about them and I think it was successful. Now we need time to understand what to address next. Our balance in the corners is not bad, we can still improve the car and we tried a few things in the afternoon. Maybe the track layout helps us a bit, but this remains a tricky track where it is crucial to have a good feeling in the car and that's what we have to work on now."