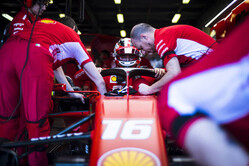 Ahead of today's second practice session, the air temperature is 25 degrees C, while the track temperature is 47.3 degrees. It remains bright and sunny.

The Mercedes pair set an ominous pace earlier, both drivers almost a second quicker than the closest Red Bull or Ferrari, though it was Charles Leclerc who was quickest through the speed-trap.

The works Mercedes team, along with customers Williams and Racing Point, has the latest power unit this weekend, the previous version, having scored five successive 1-2s, being the most successful engine in the history of the sport.

The lights go green and first out is 2008 winner Robert Kubica, who handed his car over to Nicholas Latifi in the earlier session.

Ten minutes in, Vettel is the first of the big guns to head out. He is followed by his Ferrari teammate.

A 14.704 sees Albon go top, as Magnussen goes fifth ahead of Norris and Raikkonen.

Magnussen is warned that the wind is "very gusty", as Sainz receives a similar message.

Gasly is the first of the Bulls to head out, as Vettel raises the bar with a 13.966.

As Hamilton heads out on the mediums, Russell is the first driver to emerge on the softs.

Straight out of the box, Hamilton goes quickest with a 12.938, while Bottas goes second, just 0.284s off the pace, on the hards.

Already the Silver Arrows are 0.8s clear of the Ferraris. Vettel and Leclerc both improve, but remain 0.6s off the pace.

A 13.753 sees Hulkenberg go fifth, ahead of Sainz and Verstappen, the Dutchman on the hards.

Alfa Romeo is changing the gearbox on Giovinazzi's car - probably the result of his clash with the walks in FP1 - and he won't be out for a while.

A rare mistake from Hamilton sees the Briton slide across the track and clout the wall at Turn 9 with his right-rear. In the process he picks up a puncture but is able to make it back to the pits.

"Sorry about that," says the Briton.

Once back in the pits mechanics swarm over the car like worker bees.

Meanwhile, Verstappen has leapfrogged the Ferraris and is now 0.45s off the pace.

Thirty-five minutes in and there are just three drivers on track, Bottas and the Ferrari pair. All three are on the softs.

Magnussen goes fourth with a 12.935, as more drivers switch to their qualifying sims.

"Carlos would you like one more lap?" "No," comes the reply.

Ricciardo goes sixth (13.016) and his teammate seventh, as Albon and Kvyat go ninth and tenth.

Verstappen posts PBs in the first two sectors, and as he looks set to make a major improvement he has his teammate running slowly just ahead going into the final corner. The Dutchman clouts the Wall of Champions with his right-front.

"I hit the wall out of the last corner," he reports, "I had Pierre really close in front."

The Racing Points and McLarens are last to do their qualifying sims and Perez immediately goes seventh with a 13.003. Stroll subsequently posts 13.171 to go tenth.

As the crew check Verstappen's car for damage, with the rear end removed from Hamilton's car it looks like we won't be seeing the world champion again.

With 35 minutes remaining Giovinazzi is back on track. He's on the hards.

Russell reports an issue with his right-front locking-up at a number of corners.

Sainz goes fourth with a 12.553, ahead of Magnussen, Hamilton, Perez , Ricciardo, Hulkenberg and Stroll.

"I need to box, it's just a bit dangerous" says Hulkenberg, the German's Renault clearly suffering degradation to its softs. He switches to hards.

Both Ferrari drivers are also unhappy with their tyres, Vettel reporting that his softs rears are "melting away". The bad news being that Sunday is expected to be even warmer.

Grosjean is on the receiving end of some local hospitality courtesy of Stroll as they head into the final chicane, the Racing Point nudges the Haas which has to cut the corner. The stewards are to investigate.

Gasly reports a vibration, and judging by the wobble in his voice it's not a good one.

With just four minutes remaining, Verstappen is back on track.

Ahead of the weekend the big question mark concerned Ferrari, but in the wake of today's event it appears that tyres are likely to be at the heart of things, as well as driver error, which, as we have seen today, can happen to the best of them.