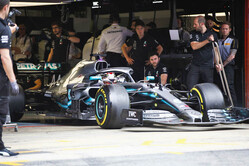 There is one reserve driver on duty this morning, Nicholas Latifi replacing Robert Kubica in the Williams.

The lights go green and Sainz leads the way, followed by Giovinazzi, Magnussen and Russell.

Russell complains that one of his belts in not comfortable.

The Ferrari pair are among the early risers.

Norris posts the first time of the weekend, the McLaren driver crossing the line at 1:23.598.

"I almost hit a groundhog," reports Latifi, who has a close encounter at Turn 6. Unperturbed, the Canadian subsequently posts a 19.311.

The Canadian, who is clearly determined to get in as many laps as possible, appears to be overdriving the Williams, or merely exploring the limits, as he makes a number of mistakes.

Eighteen minutes into the session, Hamilton climbs into his car, he, Verstappen and Bottas have yet to appear.

Despite a number of scrappy laps and near misses with the walls, Latifi improves to 18.347, but is demoted when Sainz posts 17.769.

Verstappen finally heads out, the Dutchman immediately going quickest courtesy of a 15.998. Raikkonen goes second, ahead of Sainz, Magnussen, Latifi and Kvyat.

"This track is insanely dirty," reports the Dutchman.

Most of the running so far has been on the mediums, though Perez, who goes third (15.821), Kvyat and Albon are on softs.

Twenty-seven minutes in and the Mercedes pair head out, both are on the softs.

An issue with the data feed means we don't know what compound Verstappen is on but we assume it is the softs.

A spin for Grosjean at Turn 6 brings out the yellows.

Leclerc improves to fifth with a 15.235, thereby displacing his Ferrari teammate.

It appears that Verstappen is actually on the mediums, not the softs.

How close do you want it? Bottas and Hamilton post identical times, both stopping the clock at 13.495, before the Finn improves to 13.229.

A 13.148 sees Hamilton go top as Vettel, now down in ninth, continues on his mediums. One place behind is Norris (15.545) who is the fastest runner on the hards.

Bottas retakes the top spot with a 13.001 as we approach the time when the extra set of tyres have to be handed back.

Early days, but fourth and fifth for the Racing Points could owe a lot to the fact that the team, like Williams, and of course the works cars, has the latest Mercedes engine. That said, the old engine was no slouch and the Points were far from impressive.

Nonetheless, at 205.8 mph, Leclerc is proof that Ferrari has the power advantage. Second quickest in the speed-trap is Perez at 203.1 mph.

Lots of work going on on Verstappen's car, though the team insists there is no cause for concern.

After several minutes of inactivity, a Honda engine burst into life and moments later Gasly heads out. The Frenchman is currently 12th, 2.774s off the pace. He is followed by Bottas, both on the mediums.

Despite being on the slightly harder mediums, Bottas goes quicker in S1, but subsequently loses pace in S2. At the line however it's 12.914 as he consolidates top spot.

Hamilton also on the mediums, goes quickest in S2, as Giovinazzi (mediums) goes fourth overall (14.582). Hamilton crosses the line at 12.767.

The improvements in times are proof that the track is rubbering in.

Reporting a vibration from his rear-right, Grosjean is informed that it appears to be paint from the (newly painted) garage floor.

Giovinazzi is the first driver to push that little bit too hard and hit the wall, the Italian losing the rear of the car as he exited the chicane at Turns 8/9. Clouting the wall with his left-rear he sustains a significant amount of damage. The VSC is deployed.

As the VSC is withdrawn, Grosjean expresses his displeasure at a slow, weaving Stroll.

Down in 18th, Vettel improves to fifth with a 14.118, the handling of the car suggesting that he's on high fuel.

Magnussen reports that his car is pulling to the left under braking, while teammate Grosjean is arguing with his engineer.

Hamilton is told that most drivers are struggling to get their tyres working again.

As if to prove the point, Vettel subsequently spins at the hairpin. It's a strange incident, the German locking-up and then losing the rear end.

In the Haas garage, the Loctite has been pressed into action, as the team seeks to stick the paint back on the garage floor.

Raikkonen enquires if new cables have been placed in his cockpit as he keeps banging something.

Sainz emerges from the McLaren garage with the rear end of the car smothered in flo-vis.

Haven't heard this one for a while, but Grosjean is having issues with his brakes.

Bottas reports misfiring, as Albon and Hulkenberg both get it wrong in Turn 8.

More problems for Bottas as he reports loss of fuel pressure, the Mercedes slowing drastically as he heads back to the pits.

Replay shows Verstappen taking a very bumpy ride over the kerbs at Turn 8.

As the clock winds down, Bottas and Giovinazzi are the only drivers not on track.

It's only FP1 on a very, very green track, but that new Mercedes power unit is worryingly quick, with both the Bulls and Ferraris almost a second off the pace.