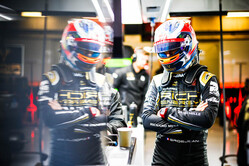 Sebastian Vettel was lucky to escape punishment after causing an incident which led to Romain Grosjean being handed a three-place grid penalty and his normally placid team boss, Guenther Steiner, being left uncharacteristically angry.

After qualifying, Grosjean and Lando Norris were summoned by the stewards following an incident in Q1 which saw the McLaren driver, who was on a flying lap, impeded by a very slow Grosjean.

The Frenchman was widely criticised by TV pundits following the incident, and it came as no surprise when he was handed the grid penalty and another penalty point ion his licence.

Accused of driving unnecessarily slowly and impeding Norris in turn 14, Grosjean said that he was about to commence a flying lap when he was overtaken by Sebastian Vettel and thus slowed significantly to maintain a sufficient gap. He made clear that he was not advised by the team of the rapid approach of Norris, who was already on a flying lap.

The speed differential was 85 mph (136 km/h) at the point where Norris had to take avoiding action.

While the stewards accepted that Grosjean did not intentionally intend to impede Norris, they made clear that it is the driver's responsibility to be aware, when travelling abnormally slowly, that faster cars may be approaching.

However, just ten minutes after Grosjean was handed his penalty, Vettel was summoned by the stewards, for allegedly driving unnecessarily slowly on his in lap.

Vettel stated he was on a flying lap and, when coming into turn 1, he heavily flat-spotted both front tyres. He subsequently aborted the lap however the car was experiencing severe vibrations - as evidenced by the telemetry tabled in evidence.

As a result, the driver could not maintain the speed required to stay below the maximum time specified.

The stewards subsequently decided to take no further action.

"If you look at the end result, he did hold me up in the final corner," said Norris, "and for any driver you have to do as much as you can to make sure that doesn't happen.

"But, he did get screwed over a bit by Sebastian, who overtook him into the final corner," he added. "To be fair to him, (Grosjean) only had three seconds or something for his team to tell him that I was behind if they didn't already, and it would have been very hard for him to suddenly change his whole approach to basically giving up his whole lap.

"I don't think he could have just stopped, he maybe could have done, but from what he said he didn't know I was behind until I was pretty much about to crash into him.

"I don't really know what to say," he added, "Vettel screwed him over, which isn't a very nice thing to do in terms of us being racers. We try to respect each other in terms of you've got a car ahead, you don't overtake them into the final corner like Magnussen and Fernando in Monza last year as you ruin both of your qualifying laps. I think he did what he could when he knew, but he did impede me."

"To give Romain a point, when he didn't do anything wrong; there was no radio call... why should he get a point?" said Steiner. "It's just like having it out with somebody. It's completely inappropriate. The grid penalty, we can discuss, but to give him a point. Guys? Where are we living?

"It's very difficult, if you have one car in the middle which is on a fast lap, it's very difficult," he continued. "I don't want to discuss the penalty of the grid position, that's a different story. But a point to the driver? What can he do? He should look in the mirror, yes, but then he doesn't look forward. I don't know where the stewards are going with it."