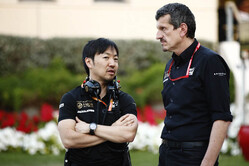 Rich Energy Haas F1 Team drivers Kevin Magnussen and Romain Grosjean earned strong starting positions for Sunday's Bahrain Grand Prix by advancing to the final round of knockout qualifying Saturday at Bahrain International Circuit in Sakhir. The duo qualified sixth and eighth, respectively, as the American squad placed both its drivers into Q3 for the second straight race. Grosjean will start Sunday's race from 11th, however, after a three-position grid penalty was assessed due to an incident in Q1.

Magnussen set the eighth-fastest time in Q1 with a lap of 1:29.532 around the 5.412-kilometer (3.363-mile), 15-turn track. Grosjean was 10th-quickest with a lap of 1:29.688. Only the top-15 drivers move on to Q2. Grosjean's grid penalty was assessed for impeding McLaren driver Lando Norris in turn 14 during the initial qualifying run of the evening.

Taking the pole for the Bahrain Grand Prix was Scuderia Ferrari driver Charles Leclerc. His fast lap of 1:27.866 set a new track qualifying record at Bahrain and was .294 of a second better than his teammate and runner-up Sebastian Vettel. It was Leclerc's first career Formula One pole and, at the age of 21 years, 166 days, made him the second-youngest pole qualifier in Formula One history. Coincidentally, the record is held by Vettel, who earned the pole for the 2008 Italian Grand Prix at the age of 21 years, 72 days.

Romain Grosjean: "I think we can be happy with qualifying both cars in the top 10, it's very encouraging. It looks like we're the most stable, in terms of performance, in the top 10, which is good. You always hope for a bit more, but I was happy to take eighth. It should be a fun race tomorrow. It's going to be long, it's going to be hot, there's going to be a lot of tire degradation. I think it's a cool track for racing, hopefully we'll bring some good points back home."

Kevin Magnussen: "I'm happy and proud of the team today for delivering the car that I had in qualifying. To be sixth, and only a few thousands of a second from the fastest Red Bull is pretty good, and maybe a little unexpected. We were on par with them, and I hope we can give them a hard time in the race. I'm in a good starting position, so that's the first box ticked, we'll take it from there. Our race runs weren't as good as our qualifying runs on Friday in practice, but I hope we can change that tomorrow and have a good race."

Guenther Steiner: "On the positive side, qualifying so close to a Red Bull, for us is fantastic. We showed that as a team we work together pretty well. We had one issue with Romain (Grosjean), he's been penalized three grid positions and one point. If you want to discuss the grid position, that's one thing, but the point on his license is unacceptable. He had nothing to do with this, it was a clear misunderstanding with his crew. So, we start sixth and 11th, and we'll try to do our best in tomorrow's race and make up the positions lost due to the stewards."