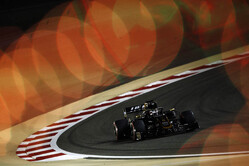 The second round of the 2019 FIA Formula One World Championship began with practice Friday at Bahrain International Circuit in Sakhir as teams prepared for the Bahrain Grand Prix Sunday.

Two 90-minute sessions - FP1 and FP2 - on the 5.412-kilometer (3.363-mile), 15-turn track were on the docket, the first of which was run under a clear and sunny sky while the latter was the more representative session for what Rich Energy Haas F1 Team drivers Romain Grosjean and Kevin Magnussen and their counterparts will experience in Sunday's race, which begins shortly after sunset.

Speeds picked up and lap times dropped in FP2. Magnussen wrapped FP2 as the seventh-quickest driver with a time of 1:30.000, which was 2.60 seconds better than his best lap in FP1. His quick time came on the 10th of his 33 laps on a set of soft tires. Grosjean shaved 2.92 seconds off his FP1 time with a lap of 1:30.068 to jump to ninth fastest. His fast lap came on his 12th tour, also while utilizing the soft tire. He completed 34 laps.

Romain Grosjean: "We've done some good work today, and there's more to be done before tomorrow. It was interesting to drive the car on a very hot track in FP1, then later in more representative conditions in FP2. We're still learning about the VF-19, so I'm pretty happy to see how it performs. I'd like a bit more rear grip, especially on the long runs, that's an area I think we can do a bit better, I'm confident we'll find it. I think we've got some good margins to improve the car though, and that's always a good thing before qualifying. We'll be in the mix."

Kevin Magnussen: "I'm reasonably happy with our day. It was good to get FP2 in the darker, cooler conditions. FP1, well, it wasn't scary, but it was very tricky with the hotter temperatures. It made the tires tricky, and the car was not behaving well, but it was the same for everyone. It was good to get into it in FP2, we got to see how the car acted in the conditions that we'll have in qualifying tomorrow. I was happier in those conditions than in the earlier session, so that's a positive. The car was behaving much better."

Guenther Steiner: "It was quite an interesting day. FP1 seemed to be difficult, the conditions are so different here between the two sessions on Friday, with FP2 being similar to what we'll face in qualifying tomorrow. We weren't where we wanted to be in FP1, but we stayed calm as we knew the conditions would change later. We did a good job in FP2. I think tomorrow will be the same thing, we need to stay calm in FP3, then work with what we found out in FP2 for qualifying. Overall, not a bad day."