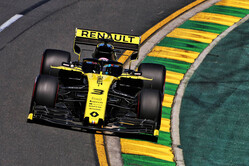 His race over before the first corner, following a move which led to criticism from team boss, Cyril Abiteboul, Daniel Ricciardo believes that a heavy workload of promotional work in the days leading up to the race helped compromise his performance.

"I'm just drained," he told reporters after retiring just 28 laps into the season opener, due to damage incurred at the start.

"I just tried to please everyone this week and didn't look after myself," he admitted. "We'll change it for next year.

"It's tough," he sighed. "I feel like the whole week we're... this week is a tough one... we're always pushing uphill.

"You can never do enough, but I feel we do more than enough. I don't want to blame… but I... I don't know, I feel flat for more reasons than one."

"It's a weekend mainly of lows," said Abiteboul of Ricciardo, according to Motorsport.com, "apart from glimpses of a very good and strong performance from him and the car in free practice, but in free practice we don't care.

"We need collectively to do better," he continued. "It's a learning exercise, as we always say. When you change driver you make some steps backward before you step forward. That's what we're going through as we speak."

Asked about the start, which saw Ricciardo go wide and onto the grass, running over a gutter which ripped off his front wing, the Frenchman said: "Daniel didn't have the same luck as Nico, trying also to regain some positions at the start.

"Obviously it was a bit extreme," he added. "We had to retire his car because of the temperature cooking up due to the damage, so that was the reason for the retirement.