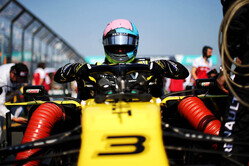 Still to make it to the top step of the podium at his home race, today Daniel Ricciardo barely made it to the first corner.

Today was the eighth time the Renault driver has contested his home race, and while he stood alongside Nico Rosberg and Kevin Magnussen on the podium in Melbourne in 2014, his first season with Red Bull, he was subsequently disqualified due to a fuel rate issue.

In 2013 he retired, as was the case in 2017, while his best finish to date - other than that disqualification - is fourth, which he achieved in 2016 and again last year.

While he wasn't expecting a podium finish this time around, he was aiming for a points finish, and based on teammate Nico Hulkenberg's run to seventh this was entirely possible.

Unfortunately, despite a strong start, as he raced off the grid alongside Sergio Perez, Ricciardo went wide and onto the grass, subsequently hitting a gutter which ripped off his front wing and damaged his bargeboard.

Doing well to slow the car and thereby not T-bone Perez - and others - in Turn 1, Ricciardo subsequently pitted for a new front wing but was eventually forced to retire due to other damage incurred in the first lap incident.

"I feel that was pretty unlucky," said the Australian. "I just put two wheels on the grass and the next thing there's a massive gutter there, or a gutter ditch.

"Sergio's start wasn't great," he added. "I had a bit of a run... he made a little flinch, but when it happens that quick, you see him move, so I moved, then he straightened up, and the next thing I'm on the grass.

"But you never know how much he's going to move," he admitted. "Because he was still in front at the time, you just follow his initial reaction. That second one just put my wheel in the grass.

"When I hit the grass, I wasn't actually too concerned. I thought I'd just drive through it and I thought I had enough momentum to stay alongside him. But obviously that ditch was there, and that was it."