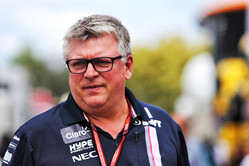 With the increasing rumblings in the wings concerning the financial and legal affairs of team co-owner Vijay Mallya, it was inevitable that change was in the air.

Yet, as the financial situation worsened, the little team that could, the team that had finished best of the rest for two consecutive seasons, continued to punch well and truly above its weight.

Emerging from the nightmare mid-summer, with new owners and a new name, the Silverstone-based outfit that started life as Jordan in the early 90s, was still able to get it together enough to take seventh in the standings and give the (once) mighty McLaren a run for its money.

Looking ahead to the new season, which will see Racing Point emerge, phoenix-like, from its troubled past with another name and a solid financial foundation, team boss Otmar Szafnauer insists that the basic approach of the team will not change.

"I've seen it so many times where teams have decided to either build a new wind tunnel or a new factory or new facilities, and the performance of the car suffered because the same people that design and specify a factory are the same ones that design and specify the racing car," he tells the official F1 website for its Beyond The Grid podcast, "and if you're doing one you can't be doing the other. So we've got to be very careful that if we do embark - and we will embark - on improving our facilities and infrastructure, that the car doesn't suffer.

"We've got to continue to maintain that efficient nature that we have," he continues. "We can't lose that, and if you do have a little bit more financial resource but you stay efficient, then your output should be even better.

"The risk is that, if you've got significantly more financial resource, you lose the efficiency," he admits, "and then your output is no better, but you've spent a lot of money - or even worse, your output can be worse and you've spent a bunch of money. So we've got to consciously be aware that that can happen and make sure it doesn't happen to us."

As mentioned, the team is looking to effectively start again, which includes a brand new factory and much more.

"All those types of things we're discussing now," he says. "So a bigger factory, but to build a bigger factory, you've got to buy the land first. Also within the factory, to detail what type of equipment, how much of it, what is important, what isn't important. All of this while we mustn't take our eye off the ball... that is, building, designing, producing and developing a competitive racing car."

It is not the work of a moment however, and Szafnauer warns fans that the fruits of all this investment might not become apparent until 2020.

"I think 2020 will see a bigger change than from '18 to '19," he admits. "There are things that we learned recently that will help the 2019 car. However, having said that, predominantly the 2019 car was designed, or the backbone of it was designed, by the time the consortium took over. The chassis was being manufactured already."

"Racing Point was an off-the-shelf company that was used to buy the assets of Force India, so it could very well be that we change again. We'll only change again if we find a better name… but I do hope we find something better!"