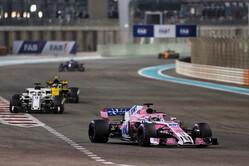 Sergio Perez: "Considering everything that has happened this weekend, I am pleased to finish inside the points. I've not been happy with the car and I've not had the pace we expected. We just never solved the balance issue and I think there could be some damage somewhere in the car. The start of the race was very important and after a strong first lap I was up inside the top ten. After that, the strategy worked as planned and my main competition was Leclerc. I was very close to him in the final few laps, but I just didn't have the pace to overtake him. I am pleased we could protect the seventh place in the team's championship and it was important to end the season with some points."

Esteban Ocon: "It's a very frustrating way to end the season. Everything was going well, we had some fantastic battles and overtakes, and the pace we had was really good. We weren't on the best strategy because we had to start on the hypersoft tyres, but we had managed to recover well and we were looking good for a finish in the points. We did everything right as a team but sadly the car had an oil leak which forced us to retire. That's how racing is: days like these are disappointing, but they make you stronger. I am grateful for all the support I have received from the fans, people inside the sport and of course inside the team this season."

Otmar Szafnauer: "The main priority today was to score points and confirm seventh place in the standings, which we delivered thanks to Sergio's run to eighth place. Starting on the ultrasoft tyre was definitely the optimal strategy and a strong opening lap was crucial to the final result. Esteban starred throughout the race with some great battles, but unfortunately his car suffered a loss of oil pressure and he had to retire. They both drove well tonight, as they have done all year, and we end the season on a positive note."