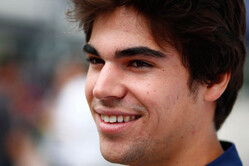 Racing Point Force India has revealed that Lance Stroll will make his debut with the team on Tuesday when the post Abu Dhabi test gets underway.

The youngster, whose father now owns the team, but has not been officially confirmed as a driver for the Silverstone-based outfit, will take over from Sergio Perez on Tuesday.

He will then have the car to himself on Wednesday.

It's understood that in the coming weeks the team will reveal the name it is to race under from 2019.