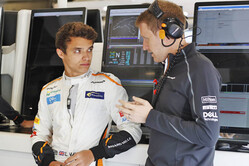 With Fernando Alonso heading for pastures new and Stoffel Vandoorne off to Formula E, the Woking team has an all-new line-up comprising Briton Norris and Spain's Sainz.

Norris, who has taken part in previous tests and FP1 sessions, will drive the MCL33 on Tuesday, while Sainz will wear the McLaren colours for the first time on Wednesday.

The two-day test should see a number of drivers make their debuts with their new teams, while others will have to wait until pre-season testing gets underway at Barcelona in mid-February.

While the test is mainly for the benefit of Pirelli as it tries its 2019 compounds, for reasons known best to themselves, the powers-that-be insists that cars can only feature 2018 components and therefore no 2019-spec aero parts may be used.