Vettel: I haven't been at the top of my game 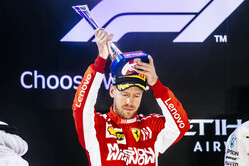 Admitting that he really needs the winter break, Sebastian Vettel insists that he will come back next season "very, very hungry".

While Maurizio Arrivabene is taking a leaf out of the Mercedes teamwork manual and at least (publicly) refusing to point any fingers as Ferrari goes another year without a title, the fact is that both championships were lost due to mistakes by the team and its number one driver.

With back-to-back wins in the opening races, 2018 couldn't have got off to a better start for Sebastian Vettel. And while there were a couple of early mistakes, they were nothing compared to the needless errors that punctuated the second half of the German's season, black holes aside.

However, though he will be on duty at the post-Abu Dhabi test, the four-time champion, while admitting that he is looking forward to the winter break, insists that he will be back next year "very, very hungry" for title success in 2019.

"It has been quite an exhausting year for me. I definitely need a bit of a gap," he told reporters after yesterday's race. "I'm pretty sure, based on the last winters, that very soon, usually after 111 days, I'm very, very hungry again for the next race.

"Getting away for a little bit and then focus," he added. "Obviously we still have the test coming up, so not yet time to rest - I think this will be an important one with the tyres for the next year - and then, I don't know... Just enjoy home. Enjoy my family, enjoy friends. Do stuff that you don't usually have much time for. Some DIY. Do some fixing at home. Small jobs.

"The year I've had, I don't think I ever have any problems raising my hand if I made a mistake," he responded, when asked about the mistakes. "Knowing as well, as a racing driver, how quickly things can go wrong, how quickly things could have gone differently this year, I think, yeah, I have to review a couple of things.

"But there's other things that went wrong and don't need a lot of reviewing and not over-complicating things too much," he added. "I know what I need to do. Certainly, here and there, looking back I haven't been at the top of my game so… I look at myself first.

"Things didn't come together so obviously we did a step back towards the end of the year which enabled us to be more competitive again," he said, referring to the updates that when introduced saw the team take a significant step backwards. "But I think we've understood what went wrong. We obviously tried to do a better job in the future. That was one key thing.

"On the other hand I think we had a lot of lessons. It was a tough year in general. The team is strong and the team has potential but surely it was a lot of things that happened inside the team.

"It's up to us to look into every single detail and make sure we come out as a stronger group, enabling us to build a stronger package for next year and for the future."

There have been times in the latter stages of the season when Vettel really looked to have fallen out of love with the sport, prompting suggestions that he might 'do a Rosberg'. Should Charles Leclerc prove as formidable a teammate as many expect - and yesterday was a good example - Vettel may well have second thoughts in around twelve months time.