FIA has no plans to change weighbridge procedure 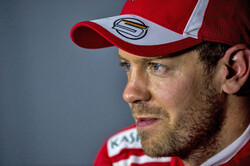 However, just over twenty-four hours earlier, the FIA's weighbridge was the scene of another altercation, this time courtesy of Sebastian Vettel, who enjoyed his own moment of argy-bargy, albeit with the weighbridge itself.

In the opening moments of Q2, with an eye on the sky and fearing the anticipated rain was about to arrive, all fifteen drivers headed out on supersofts. However, halfway through their out laps Ferrari called in both of its drivers in order to switch them to softs in the hope of setting its best Q2 times on the more durable rubber and thereby being able to start the race on them.

However, on returning to the pits to change tyres, Sebastian Vettel was given the red light indicating that he was to stop at the weighbridge set out in the pitlane just a few yards from his garage.

Already frustrated as it was feared the rain was about to arrive, the German's mood wasn't helped when it became clear the officials manning the weighbridge weren't ready for him.

For his troubles the German was subsequently given a couple of penalty points and fined 25,000 euros.

For once, many sympathised with the German, feeling his frustration at being called to the weighbridge at a time seemingly every second counted.

Nonetheless, race director, Charlie Whiting, insists there will be no change to the procedure or the timing.

"There will always be a risk you're going to be stopped," he said. "They know that and should factor that in, which is what I'm always telling the teams.

"It would be something that they say: 'If we do this, this is how long it will take, we might get stopped and have to add a minute there'.

"It's completely random," he continued. "Jo (Bauer, the FIA's technical delegate) seldom tries to stop the first car coming in, because in a short qualifying session like that the first car could be coming in with a mechanical problem, having just done half a lap. To see two cars come in for strategic reasons after one lap is unusual. It's just the way it goes."

Asked if there should really be weight checks during the actual qualifying session, he replied: "They shouldn't be underweight. We'll always have random checks in qualifying. But what we do say is if the conditions are changeable, if they are coming in and changing tyres because it's just rained a little bit, we would not stop anyone. That's when we put up the change of climatic conditions (warning). We've said that once that happens we're not going to weigh anybody else. They know if the conditions are clearly changeable, a drying track for example, we don't pull them in for weighing."