Ocon and Verstappen summoned by stewards 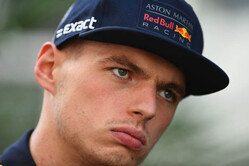 Days after Max Verstappen admitted that he could have done "damage to someone" in the wake of his failure to secure pole position in Mexico, the Dutch youngster has been involved in a post-race incident with Esteban Ocon.

The two clashed during the race, Verstappen losing the lead - and the win - when he was hit by Ocon's Force India as the Frenchman attempted to un-lap himself.

The stewards subsequently handed Ocon a time penalty and penalty points, however both drivers were summoned when it was learned that the two had physically clashed in the moments after the race.

Verstappen appeared to confront Ocon and then push him, the Force India driver reciprocating and then the Red Bull driver pushing him again.

While one can sympathise with Verstappen for the on-track clash, he has done himself no favours in terms of the post-race Verstappen-slappen, especially when one bears his Mexico comments in mind.