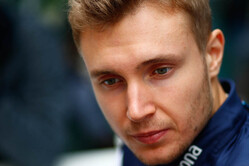 In the opening moments of Q2, as drivers struggled to post a 'banker' lap before conditions deteriorated, there was a heart in the mouth moment when Sergey Sirotkin almost collected a slow Lewis Hamilton who appeared not to have seen the Russian as he moved to the left off of the racing line. In his efforts to avoid the Mercedes, the Russian moved further out, getting his left wheels on to the grass, but thankfully avoiding what could have been a monumental accident.

While most thought Hamilton might get a call from the stewards, the Briton was critical of the Williams driver.

"Basically everyone was on an 'out' lap," Hamilton subsequently told reporters, "me, Sergey and everyone in front of me - and when you're on your 'out' lap, towards the end of the lap Valtteri was up ahead of me so he was backing off to get his gap so I had to make sure I kept a gap with him.

"As far as I was aware, no one behind was on a lap so I was making sure I had the gap but then all of a sudden, out of the last corner - sorry, out of turn 11 - I saw a car coming at high speed so I was like 'oh my God, is that someone on a lap?' so I went to move to the left and that's where he decided to go but he wasn't on a lap, so I don't really know what his thinking was really, with it, because respectfully, between all the drivers, we all do respect... you know, I could have easily tried to overtake Valtteri or whoever was in front of him.

"We all know to keep our space by that point so it was generally quite a disrespectful move in the sense of where it was dangerous between us both because I was not expecting it to happen that way, and so I was actually trying to get out of his way but he ended up going inside but then he got to the corner and then slowed up to utilise the gap but then also I don't know whether to slow my lap up or not.

"It was kind of strange," he admitted. "It was completely unnecessary because he had a space behind, behind him there was a bit of a space so ultimately his lap and my lap weren't great from that so hopefully he can learn from it."

According to Sirotkin, as Williams had no new tyres available he was running with a used set from Q1 which had not been pre-heated.

"They were minus 27 degrees compared to the delta," he revealed, "so I had to push very hard all the way around. I was still pushing all the way through Turn 11 and he was very slow preparing for his lap.

"Because I was coming so quickly, I didn't expect him to give me the room as we were both on out-laps," he continued. "I had such a big speed difference with him, that I just moved myself to the left to get through and, at the last minute, he saw me and tried to move. I was like 200km/h quicker than him at that point on the left so it was quite difficult to get around and to avoid the contact.

"But I don't think there is anything he did wrong," he admitted. "It was just the situation that I had to push, which was quite unusual for the out-lap, but these things can happen."

Told that Hamilton had accused him of being "disrespectful", the Russian shook his head.

"I would disagree," he said. "I think if you look generally at what I am doing on track, there are not many other drivers who pay so much respect, especially to the leading cars that I know are fighting for the title. There are not many people here who respect him as much as I do. It was my situation, I just needed to push it all the way to the end to get some temps in it, even though I think I would never make it enough. There was no solution for me to slow down and cruise to his speed for the last quarter of the lap."

Asked if he felt Hamilton should have been investigated, he replied: "I am not surprised. It is very normal. It has just been a unique situation that you never really find often.

Ironically, Sirotkin subsequently received a reprimand for driving unnecessarily slowly on an in lap during Q1.

The stewards deemed the Russian had exceeded the specified maximum time between Safety Car Lines on his in lap, and though he "did not drive in a manner that was unsafe or adversely affected any other driver, he did exceed the delta time on his dash, though it appears that the majority of the time was due to a setup error".