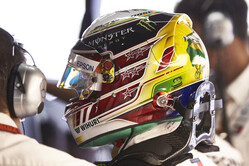 While Max Verstappen was quickest in FP1, and Valtteri Bottas in FP2, it was Sebastian Vettel who set the pace this morning, the German posting a very, very impressive 1:07.948.

Lewis Hamilton was second quickest, 0.217s off the pace, with Valtteri Bottas a further 0.300s behind.

Both Red Bull drivers were over 0.7s off the pace, and despite the high altitude it is unlikely the Austrian team will be a threat this afternoon, certainly once the 'party modes' are brought in.

That said, in yesterday's sessions it was clear both Ferrari and Mercedes were experiencing blistering, something that didn't appear to effect Ricciardo or Verstappen, so perhaps the Bulls are thinking more about Sunday - when it really counts - than today.

Not for the first time, the midfield looks set for a shake-up, with Haas looking particularly strong here, along with Sauber. On the other hand, Renault has failed to impress thus far.

Despite having the latest spec (3) power unit at its disposal again, only Pierre Gasly appeared to benefit, while at Force India Sergio Perez had a difficult morning that left him at the bottom of the timesheets along with the McLarens.

Two drivers go into the session knowing they have grid penalties, which may in turn influence their approach, particularly in Q2. Ricciardo has a five-place penalty for an additional turbocharger, while Ocon also faces a 5-place drop for a change of gearbox.

Ahead of Q1, the air temperature is 23.4 degrees C, while the track temperature is 37.6 degrees. It is bright but there remains quite a lot of cloud. Indeed, in the moments before the start of the session, Race Control claims there is a 60% chance of rain at some point over the next hour.

Leclerc heads the queue at the end of the pitlane, the teams appearing to believe that the rain will arrive sooner rather than later. The Mercedes duo are among the first out.

"The rain is on its way, important to get lap one," Hamilton is told as he heads out of the pitlane. Raikkonen is advised of a tailwind in T4.

Stroll getting horribly out of shape, as Vettel posts 8.534 to go fourth.

Following his issue with a "dislodged oil breather pipe", it's worth noting that Hamilton's Mercedes continues to emit smoke.

Bottas can only manage seventh, the Finn posting 8.863.

A spin for Leclerc at T10 as Bottas complains of being blocked by a Haas in the final corner. Nonetheless, next time around the Finn improves to fifth with an 8.492.

"There is some drops," reports Magnussen, as Raikkonen confirms "we have some rain here but it is very light. That's more than you can say about the sky however, which is very dark.

"OK, I've got no tyres left and it's raining," moans Grosjean.

Hulkenberg improves to 11th and Ocon 14th, as drivers report the rain is falling heavily at T4 and T12.

With 2:10 remaining, Sainz, Alonso, Stroll and Vandoorne are all on track and seeking to improve, but the worsening conditions won't help their cause.

Sainz improves to 16th (9.269), but it is not enough, on the pit-wall Alan Permane shakes his head in frustration.

As the rain increases in intensity, albeit on only one part of the track, there are no further improvements.

Ahead of Q2, the Sauber pair are ready and waiting, Leclerc ahead of his Swedish teammate. "There are still a few drops around," the Monegasque is advised.

The lights go green, and in moments there are 14 cars on track, Sirotkin the last driver to emerge.

"We are expecting more rain in four minutes," Grosjean is advised.

Ericsson posts 8.579, but this is beaten by Ricciardo and then Verstappen, before Hamilton and Bottas (7.727) also go quicker.

"I can see the rain coming," says Hamilton, as the Ferrari pair seek to post their times on softs before it arrives.

The Bulls both switch to the yellow-banded rubber as a replay shows Hamilton and Sirotkin almost having a massive moment. A real heart in the mouth moment as the Mercedes veered into the path of the Russian.

Though he's quickest in S2, Verstappen fails to improve on his previous best, having lost time in the damp final sector.

The cameras pick out Leclerc who is having a miserable time on his supersofts, the Sauber slipping and sliding all over the place.

The Mercedes pair have also headed out on the softs, but they soon realise that they are not going to improve. Clearly, for once, Ferrari got the jump on its rivals in terms of strategy.

As the rain increases in intensity, it's bad news for Hulkenberg, Ocon, Perez, Leclerc and Sirotkin, who look to have lost out, though there is still 4:50 remaining.

Gasly, Leclerc, Perez, Ocon and Hulkenberg head out in a late bid to improve, but as the Sauber driver admits: "It's raining too much."

That said, Vettel is on track on a set of supers.

Against all odd, Leclerc posts PBs in the two final sectors to go 8th (8.335), which dumps Magnussen into the drop zone, the Dane watching from the (dis)comfort of his garage.

Excellent strategy from Ferrari and a mega-lap from Leclerc.