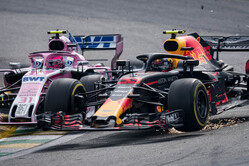 Had Ferrari and Sebastian Vettel not fallen apart after the summer break, it would have been fitting to see the title decided here at Interlagos, one of the few remaining epic circuits on the F1 calendar.

Indeed, going slightly off topic, it was almost nauseating to hear the Sky F1 team gushing over the Hanoi track this weekend, a characterless, uninspiring layout that will soon take its rightful place alongside the likes of the tracks in India and Korea, while the Sky F1 team gushes about the proposed track in Kabul.

Anyway, Interlagos deserves to be the place for title - and titanic - showdowns, not the likes of Abu Dhabi... or Hanoi.

Despite the title being decided, it is great to see that for once Lewis Hamilton hasn't eased off, his performance in Q3 yesterday was as if the championship was still wide open, while Sebastian Vettel was similarly charged.

Though the all-important constructors' title is still up for grabs, it would be great to see these two giants of the sport, go for it today if only to prove a personal point, and based on yesterday's showing that is exactly what they intend. Rather than being an anti-climax, there is every chance today could be one of the highlights of the season.

We live in hope.

Other than raw pace, we also witnessed what looks to be a brilliant - and rare - strategic masterstroke from Ferrari in terms of qualifying on the soft tyres, even if it took some silliness at the weighbridge to get there.

Behind Hamilton and Vettel we have the usual suspects, in terms of Bottas and Raikkonen, with Verstappen breathing down their necks.

Having looked strong on Friday, once the party modes were introduced yesterday the Bulls didn't stand a chance. However today, they should be able to give a good account of themselves, and on Friday they didn't appear to suffer the blistering issues that affected the Mercedes and Ferraris.

Poor old Danny Rick, courtesy of a turbocharger wrecked by an over enthusiastic marshal in Mexico, will start from eleventh, however, rather than wondering how quickly he will dispose of the likes of Magnussen, Gasly and Grosjean, we're sure the popular Aussie will be more concerned at actually getting to see the chequered flag for once.

As for Messrs Magnussen, Gasly, Grosjean... what a midfield battle we (hopefully) have in prospect today, what with Ericsson starting from sixth ahead of his Sauber teammate, Charles Leclerc, whose final Q2 lap was the stuff of legend.

The fight for domination of the midfield, especially with Force India and Renault having had a torrid time of it thus far this weekend should be epic, though, not for the first time the lesson to all is that the race cannot be won at the first corner... only lost.

The Haas duo, in particular, should pay heed to this warning, for though there have been technical and strategic issues this season, Grosjean and Magnussen haven't helped themselves, and the failure to be closer to - if not ahead of - Renault is not entirely the fault of the Monza stewards.

Indeed, with six Ferrari-powered cars in the first ten, this could be a significant day for the Italian company as it seeks it first constructors' title since 2008.

Further back, yet again Stoffel Vandoorne has failed to out-qualify his teammate, yet at the same time few have pointed out the fact that at Williams Sergey Sirotkin has regularly out-paced Lance Stroll. While Mr Stroll might give Sergio Perez a run for his money next season, one has to wonder how he would fare against Esteban Ocon.

Then again, as we know from experience, in F1, money talks.

Of course, the Ferraris are the only two drivers starting in the leading ten on the softs, which means that while they have durability the Maranello pair will not have the pace of the supersoft-shod drivers. Therefore, a strong start is imperative.

Ricciardo asks his team to check his car as he has seen something "fly off" the Sauber and he is concerned it could be lodged somewhere on his car. It turns out that it is part of Ericsson's diffuser. Rotten luck for the Swede who is heading to IndyCar next season, and is starting from his best ever grid position for an F1 race.

As well as the Ferraris, Magnussen, Hulkenberg, Sirotkin, Sainz, Alonso, Ocon, Stroll and Vandoorne start on the softs, while Hartley is on mediums. The rest are on supersofts.

The field heads off on the warm-up lap, though Vettel is very, very slow in getting away. On board suggests he had an issue selecting gear.

They're away. Good starts from Hamilton and Bottas. While Hamilton leads into T1, Bottas is going around the outside of Vettel who locks-up his front-left slightly after a slow getaway. Verstappen, who is behind Bottas, goes around the outside of Raikkonen, both Ferraris overtaken in the same corner in similar moves, their cause clearly not helped by those harder (soft) tyres.

However, thanks to sheer grunt on the back straight, and sheer bravery, Raikkonen makes a great move on Verstappen in T4 to re-take fourth as Magnussen runs wide behind.

A poor start from Ericsson is compounded by a slight clash with Grosjean, meaning the Sauber loses a little bit more bodywork in addition to the damage incurred before the race had even started.

Sainz and Hulkenberg are battling for 13th behind Perez. The gloves are off, as the Renault pair touch, forcing Hulkenberg to take avoiding action.

Verstappen blasts his way past Raikkonen to re-take fourth, the Red Bull driver immediately setting off after Vettel.

At the start of lap 4, Verstappen passes Vettel on the inside going into T1 as Ricciardo passes Grosjean for 7th.

A mistake sees Vettel run a little wide which allows teammate Raikkonen through.

Out front, at the end of lap 4, Hamilton leads his teammate by 1.3s with Verstappen just 0.4s behind the Finn.

Ricciardo makes quick work of Leclerc for 6th, his next target being Vettel who is 1.3s up the road.

From out of nowhere, Vettel ups his pace, the German lapping around 0.4s quicker than anyone else. Meanwhile, with the aid of DRS Verstappen is all over Bottas.

Concerned at understeer, Hartley calls on his team to check for a puncture. He is currently 16th.

At the end of lap, courtesy of a tow from Bottas, Verstappen closes on the Finn going into T1. However, he is carrying too much speed and does well to hold it all together.

As Raikkonen goes quickest in S1, the Renaults continue to scrap for 13th.

Ericsson has dropped to 14th, the Sauber still continuing to shed bits of his Sauber.

At the end of lap 9, Verstappen once again closes on Bottas, this time he makes it stick, going through on the inside at T1, much to the crowd's delight.