Whiting says Ocon shouldn't have been fighting to un-lap himself 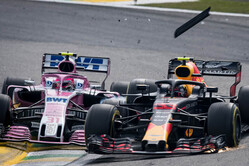 In the old days, Bernie Ecclestone would have been revelling in it this morning, for yesterday's antics have put Formula One back on the front pages, if only for the wrong reasons... again.

On the other hand, Chase Carey and Sean Bratches are no doubt to be found in a darkened room, cold towels on their foreheads as their vision of a family-friendly F1 takes a battering (no pun intended).

After all, not only were two drivers seen pushing one another - leading to one being ordered to do public service - moments later there were scantily clad women dancing on the podium. Nurse!!!

Joking aside however, as the finger pointing continues, FIA race director, Charlie Whiting, has made it clear how he feels.

In his post-race debrief, the Briton, when asked about the on-track incident, was in no doubt.

"He's absolutely allowed to un-lap himself," he said. "That's clear, it's happened many times in the past.

"However, you would expect it to be done safely," he continued. "More to the point it should be done cleanly and absolutely without fighting.

"He shouldn't be fighting to get past," he said of Ocon. "If he's got the pace then normally one would expect Red Bull to say 'Ocon's got the pace, just let him through', that sort of thing. But it seemed that he just went for it and it was a bit unfortunate that he decided to fight for it which was wholly unacceptable."

However, the Briton admits that the fact that Ocon was battling the race leader should not have influenced the stewards when making their decision.

"I don't think it makes any difference that he was a leader," he said. "It makes it worse in a lot of people's eyes, but as far as the stewards are concerned that doesn't matter."