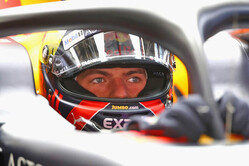 Max Verstappen: "We did the best we could, which was fifth, so I think we should be happy with that. Conditions were a bit tricky but everyone handled it very well in the garage and we came through with a good performance. We tried to get a quicker lap on the soft tyre in Q2 but just missed out. It isn't a disaster starting on supersofts so we aren't too concerned. The balance of the car wasn't ideal, we were missing some front grip. If we had it spot on we may have had a small chance of challenging a Ferrari, but when you are losing so much time on the straights it is always going to be a difficult. I'm confident the car has a good set-up for the race. Tomorrow it looks like it will get warmer and therefore tougher on the rear tyres, we should be in good shape as I think this suits us better. It is always going to be a hard race in the dry around here so if the rain comes, I think it could play into our hands."

Daniel Ricciardo: "I think we have a good car and in qualifying to be half a second off pole around here, where from memory we haven't been that close in the past, is positive. We also know from yesterday that we are even better in race conditions. Obviously, with the penalty I start a bit outside of the front pack in 11th but I will hopefully make my way through quickly and have some fun once I join the fight at the front. The rain passed pretty quickly but it did force us to use the supersoft tyre in Q2. Ideally, we wanted to start on the soft tomorrow but fortunately it was only Ferrari who made it work and Mercedes are in the same position as us. I don't think it makes too much difference as we have a good car on the super and also good tyre management. Maybe this mixed strategy will also force a two-stop race through the field and mix things up. I had some experience last year of coming from the back so I know a few spots around this track to overtake on and I'm game for that. I think my race will be shaped on how quickly I can get through the field and latch on to the top five. Anyway, whatever happens it'll be fun."

Christian Horner: "It was an exciting qualifying with the threat of rain throughout the sessions. With Max actually topping Q1 we then elected to run the supersoft to ensure being on the right tyre on the damp track in Q2 which turned out to be dry. Both drivers were within a couple of thousandths of each other in Q3 on both runs and to end up fifth and sixth is about where we expected to be around here. We are very quick in the middle sector but unfortunately sectors one and three expose our weaknesses. Nonetheless, we believe we have encouraging race pace, and despite Daniel's penalty hopefully both drivers can feature strongly in the race tomorrow."