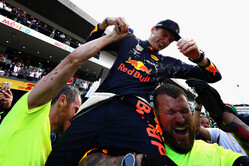 Yesterday's win not only saw Max Verstappen leapfrog Ayrton Senna in terms of world championship points, it also saw Renault leapfrog Ford-Cosworth to become the second most successful engine manufacturer in the history of the sport.

Yesterday's was the 177th win for a Renault powered car, 59 of which were with Red Bull.

"Credit where credit's due, Renault have provided us with an engine this weekend in these conditions that is competitive with our opponents," he told reporters.

"That's enabled us to go head-to-head, lock out the front row of the grid and win the grand prix in a dominant fashion. Theoretically we should have had a one-two here," he added.

"The altitude of this circuit does constrain some of our rivals and it puts Renault into a window where they are competitive," he said. "Which is why we put an awful lot of focus into this race in taking the penalties to get another B-Spec into the pool to have for this weekend."

What was initially thought to be a hydraulics problem on Daniel Ricciardo’s car is now thought to involve a clutch failure.

Meanwhile, despite the ongoing positivity from Red Bull in terms of Honda's progress it's worth noting that the Toro Rossos have finished just 28 times from 38 starts and only getting into the points on seven occasions.

Between them, Pierre Gasly and Brendon Hartley have completed just 78.7% of the season's racing laps thus far.

If Honda is to live up to the expectations of Helmut, Christian and Max next season, the Japanese manufacturer is going to have to take a significant step forward.