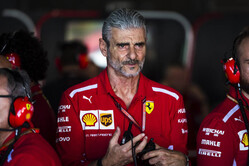 Maurizio Arrivabene: "After what happened in qualifying, today the team and the drivers fought back well. The podium could have been within our grasp, but unfortunately, damage on both cars, as a result of collisions in the race, affected the final result. Regardless of what is now a very difficult situation in terms of the championship, we will tackle the coming races giving them our best shot, maintaining concentration and determination."

Kimi Raikkonen: "After the contact with Max I saw some parts flying off my car; it was damaged pretty badly on the left hand side. Obviously, this affected negatively the rest of my race. What happened is unfortunate and after that it was pretty difficult to drive on. I had lost a lot of downforce, but there was not much I could do. It's impossible to know what our performance would have been without that accident at the chicane; we had improved the car over the weekend, it was getting better and better, but unfortunately this is what we have got today. It's been a difficult and poor weekend overall, the result is not ideal. Now we need to look deeply on everything and hopefully we'll come back at the next race on a more normal situation where we'll be able to fight."

Sebastian Vettel: "Today, I found it quite inspirational walking through the garage and watching the guys work! All the team is fired up and that certainly helps, as the last couple of weeks haven't been that easy. The spirit is unbroken despite everything. Races like this are a bit of a hand-over and we know it is difficult from where we are in the point standings, but we don't have much to lose. We have given everything so far and I believe there's still something we can learn and understand from the car. So we keep fighting and resisting and we'll see what the other races bring. As for the collision with Max, I was obviously pushing to pass, I knew he had a penalty, but I also felt that we were fast. I could see that his battery was clipping, while I had saved some energy from mine. I saw a gap and went for it on the inside, he obviously tried to defend and I couldn't go anywhere, so we touched. However, this is part of racing."