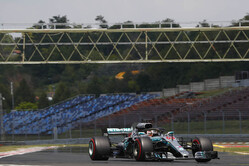 Despite the absence of Haas, the second and final day of the Hungaroring in-season test saw 11 drivers on duty, as once again Toro Rosso ran one car for its own purposes and another - shared by Brendon Hartley and Pierre Gasly - for Pirelli 2019 tyre compound testing.

In all the 11 drivers completed 1,097 laps, whereas yesterday the 10 drivers on duty completed 908 laps.

Over the course of the day there were two red flags, both caused by Force India tester Nikita Mazepin stopping on track. As a result the Russian - whose father is believed to be one of those considering making a bid for the troubled Silverstone-based outfit - completed just 51 laps.

Kimi Raikkonen set the early pace, and going into the lunch break was only 0.001s off yesterday's best set by Antonio Giovinazzi. However, in the afternoon Russell posted a 1:15.575, the fastest ever lap witnessed at the Hungarian track.

Raikkonen and Red Bull's Jake Dennis led the way in terms of mileage, both completing 131 laps. Indeed, seven of the drivers on duty completed in excess of 100 laps.

Being a test session, sensors and flo-vis were very much in evidence, with Williams continuing to work with its 2019 front wing, which at one stage sported so much flo-vis in various hues it appeared the Grove outfit was also trialling a new livery.

Yesterday's pace-setter, Giovinazzi, was back in action again today, this time at the wheel of the Sauber, his best time almost 2s off the pace set yesterday in the Ferrari.

Excluding the two drivers assigned to Pirelli testing, Raikkonen was the only 'regular' driver on duty today.

At Mercedes, George Russell was back behind the wheel of the W09. The Mercede driver completing 116 laps as the team focused on aerodynamic testing and brake developments. The team also worked on the set-up of the car.

"Day two ran very smoothly," said Russell, "and was a much more productive day for the team and me. We did some runs on the hypersoft tyre, which was an incredible experience for me. I had never driven that tyre before, nor a Formula One car in anything other than a race setup. That was a great experience and it puts a smile on my face that we achieved the fastest lap ever around the Hungaroring. All in all, it's been two productive and positive days and I can't wait for the next opportunity to drive an F1 car again.

"We've had quite a good day today," added engineer, Rich Lane. "After a tricky day yesterday, we managed to recover the test and got through most of the programme that we had planned for the week. Today's work focused on brakes and aerodynamics. We also worked on George's performance and he did a very good job today as always. It's been a positive end to the first half of the season and everyone is now looking forward to summer shutdown in a couple of days and then Spa."

Kimi Raikkonen got behind the wheel of the SF71H, while Antonio Giovinazzi, who had driven it yesterday, was having another day of testing, this time in the Sauber.

The Finn had a busy programme, focused on various set-up solutions and tyre testing looking at five compounds; Medium, Soft, Supersoft, Ultrasoft and one set of experimental and therefore unmarked Pirellis.

By the end of the day and despite several red flag interruptions, Raikkonen had covered 131 laps, the best of which being a 1:15.649, set on used Hypersoft tyres, that Giovinazzi had run yesterday.

"In the end, it's not that different to a Friday at a Grand Prix," said the Finn, "when you try out various solutions. And that's why, being a test, the lap times don't mean much."

Over the two days of testing, the SF71H completed 227 laps, equal to 994 kilometres.

Red Bull Simulator Development Driver Jake Dennis posted the third fastest time of the day as the team worked through a busy programme of development work aimed at the final stages of this season, and with an eye to the 2019 campaign.

Today was Dennis' second taste of the RB14 after making his test debut for the team in May. Once again, the simulator driver provided the team with a huge amount of valuable data and feedback as he worked through set-up options, tyre testing, aero mapping duties and, just for good measure, some performance runs on the softer end of Pirelli's tyre range.

"I was focused on some long runs in the morning and then some softer tyre stuff, which I enjoyed. To push the car to its limits was a great experience. Then it was back to more long runs in the afternoon and we think we made some big progress with the car. Overall, a very good day and I can't thank the team enough for inviting me back. Also, 131 laps for a rookie - I'm certainly feeling it now!"

"We had a very busy programme today and we got through all of the items scheduled," confirmed Senior Projects Engineer, Jeff Calam. "In the morning we again ran with a range of parts targeted at the RB15 and were able to do a lot of good work testing those against the RB14. We also got through some aero mapping of the RB14 and the data we gained will be of enormous value in relation to the final nine races of the season.

"We also did some tyre work, with Jake completing runs on the softer tyres. It was great for him to get a real feel for what the RB14 is capable of and I think he enjoyed the experience. His feedback throughout was very good and not only was it valuable for him to get another real world experience of the car, it will also help with correlation with his simulator work. All told this has been a very positive test for the team, and a great way to head into the much-needed summer break."

After spending yesterday in the Ferrari SF-71H, today Antonio Giovinazzi was at the wheel of the Sauber C37.

The Italian driver completed a total of 120 laps throughout the day, finishing in fourth place with a lap time of 1:17.558 on hypersoft tyres. The team ran through the planned programme efficiently. It consisted of mechanical set-up work, testing of new aerodynamic parts, as well as runs on various tyre compounds. The team is now heading into the Formula One summer break, and will be back on track for the next race - the 2018 FIA Formula One Belgian Grand Prix at Spa-Francorchamps.

"I am very happy with how the day went," said the youngster. "It was good to be back in the car after completing FP1 for the Alfa Romeo Sauber F1 Team last week, and spending a day of testing with Ferrari yesterday. With a full day in the C37, I feel very comfortable and have learned a lot about its behaviour on track. We completed the planned programme which was our target, so I am very pleased. The team has done a fantastic job in developing the car. With the data that we collected today, they can hopefully continue to work in that direction. I look forward to being in the car again."

"I was extremely excited to be back in the car and I am happy with the way we worked today," said Nikita Mazepin even though he onlt completed 51 laps. "We had a couple of issues with the car that prevented us from completing our programme, but we were still able to have some meaningful running and complete more than 50 laps.

"I am grateful to the crew for their hard work. Every time I step into an F1 car it's a big enjoyment boost compared to the GP3 cars I am used to. Working with the team is incredible: even though I have been with this group of people for two years now, every time I am testing I am impressed by the level of professionalism and expertise that surrounds me. There is so much I can learn from the engineers and I am determined to give the best possible feedback to help the team progress."

"Nikita settled in quickly with the team and we were able to hit the ground running," added chief race engineer, Tom McCullough. "We went through all our data and information-gathering programme in the morning, but unfortunately we had a couple of technical issues that cost us track time later in the day.

"The crew did well to replace the affected parts and we were able to catch up and bring forward our test programme, while giving our development driver some valuable experience behind the wheel. Overall, we had two productive days here in Budapest to finish the first part of the season."

"We have ended what has been a successful test," said Rob Smedley. "We came here to predominately concentrate on 2019 aero specification and we have carried out every single item on the test programme regarding 2019 that we set out to, and some more.

"The engineering team and mechanics couldn't have worked any harder and have done a great job. We need to go away now and use all the data to help us with correlation for 2019 regulations. Additionally, we had a look at the remainder of the season, some set up, some tyre preparation work and we have some interesting directions from there.

"Robert set some good lap times considering the tyres we gave him and the time in the car. Overall, it's a good way to go into the summer break for the team.

"It was a good day," said Robert Kubica. "We had a mixed programme with some data collection for next year and trying to understand our car better for 2018. We also ran a few runs with the current car specification to help with the rest of the season. We have a lot of data to go through and analyse but it was a good test to end on before the summer break.

Check out our Wednesday test gallery from the Hungaroring, here.