Ricciardo edges out Vettel in opening session in Hungary 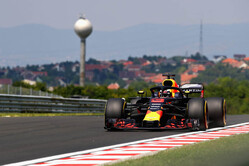 It is currently bright, but there is a threat of storms later today and tomorrow.

While this is the last race before the mandatory three-week break - though the teams only get two weeks - off, though there is a certain amount of holiday feeling in the air, with points and titles at stake the underlying atmosphere is that of hard work and determination.

Though the title fight has swung back in Lewis Hamilton and Mercedes favour, Ferrari, mourning the loss of its president, will be fired up to pay tribute to Sergio Marchionne in the best possible fashion.

Then there's Red Bull, the Austrian team in many ways heading into the weekend as favourites, this being a circuit that might have been designed with the RB14 in mind.

And as if that wasn't enough we have the shapeshifting maelstrom that is the midfield, where Haas, Renault and Force India are locked in combat as they eye the threat from Leclerc.

As in Germany, Antonio Giovinazzi is in the Sauber usually frequented by Leclerc.

In memory of its late president, the Ferraris are sporting black stripes while the drivers and crew are wearing black armbands.

As in Germany, the tyre compounds available are medium, soft and ultrasoft, the Italian manufacturer once again skipping a compound.

The lights go green and Giovinazzi is among the first out, in no time at all there are 13 drivers on track.

Among those early birds is Vettel.

While most complete a single installation lap, Giovinazzi, Ericsson, Sirotkin and Hulkenberg stay out for two.

The Bulls and Mercedes head out, leaving Raikkonen as the only no show.

Ricciardo posts the first time of the weekend, the Australian crossing the line at 1:19.556. Moments later, teammate Verstappen posts 19.280, both are on the medium rubber.

Raikkonen finally heads out, on the ultras, the Finn wasting no time at all in getting on to the timesheets, the Ferrari driver posting 18.762.

While Christian Horner confirms that, following last week's failure, Ricciardo has reverted to his Monaco engine, he admits that it is "inevitable" the Australian will suffer penalties later in the season.

Alonso is the fourth driver to post a time, the Spaniard stopping the clock at 20.059.

Alonso complains that Stroll never saw him in his mirrors.

Both Mercedes appearing to suffer oversteer the car looking a bit of a handful. Nonetheless, Bottas goes quickest with an 18.470.

On the half hour, Vettel finally emerges... on the ultras. He subsequently posts 18.218 to go quickest.

A lock-up for Giovinazzi while Ericsson runs wide, the Swede subsequently complains of "hesitation" in the higher gears.

"No rear grip," complains Gasly, while teammate Hartley admits to aborting his lap following a lock-up.

"Very strange feeling, the rear is not great," warns Grosjean, "no stability at all."

As Vettel improves to 17.997, Giovinazzi runs wide, a somewhat scrappy morning for the Italian.

Out come the yellows when Verstappen spins at T1.

At the 40 minute mark, when the extra set of tyres have to be handed back, it's: Vettel, Bottas, Raikkonen, Verstappen, Hamilton, Hulkenberg, Sainz, Ricciardo, Magnussen and Alonso.

The FIA confirms that both Ferrari customer teams have the latest ICE in their cars, with Magnussen, Ericsson and Leclerc also benefitting from new MGU-Hs.

In the Mercedes garage, work is ongoing on Hamilton's front suspension.

Vandoorne heads out and for a few minutes has the track to himself.

Given various instructions on settings that need to be changed, Vandoorne enjoys almost eight minutes of solo running before others head out.

On the ultras, Stroll posts 20.012 to go tenth, as Williams looks for a result here following its double DNF in Germany.

Bottas heads out on the mediums while Hamilton sticks with the softs.

Sainz improves (19.128) but remains seventh, one place behind his teammate.

Ericsson goes cross-country at T4 after losing the rear end having carried too much speed into the corner.

Raikkonen complains that the traffic is like "walking on the street"

Hulkenberg parks his Renault at T5 and climbs out. Replay shows he suddenly lost all power... no hydraulics, no electrics, no radio.

Meanwhile Hamilton has improved to second with an 18.036 and Raikkonen to third with an 18.319 as they both leapfrog Bottas.

On the softs, Raikkonen goes quickest with a 17.948, only to be demoted when Vettel posts 17.692 moments later. While he is on the ultras, the German encountered a lot of traffic in the final sector and did well to improve.

On softs, Verstappen splits the Ferraris with a 17.701.

As Hamilton complains of traffic, Ricciardo's opening sector is compromised by Alonso and Magnussen who once again are running close together.

Next time around however, strong second and third sectors see Ricciardo go quickest (17.613) on the softs.

"The rears are finished," warns Hamilton, who is advised to pit.

Vettel fails to improve, suggesting that the ultras are only good for the one lap here.

"That was throttle fail-safe," Vandoorne is warned, "don't brake too hard against the throttle."

As ever, attention now switches to Sunday as the teams begin their high-fuel runs.

In the Haas garage, Ericsson's car is up on its stand, after the Swede damaged the floor when he went cross-country earlier.

Hamilton reveals that his practice start was compromised by the fact the track was "too dirty".

On race pace, Vettel is looking good, but he is on the ultras while his rivals are on the softs.

A massive lock-up for Grosjean in T1, the flat-spot appearing as we watch.

As Ericsson heads out, all but Raikkonen, Bottas and Hulkenberg are on track. Raikkonen is understood to have an issue with the cooling of his brakes.

Hartley's session ends with a spin at T14 after the kiwi lost the rear mid-corner.