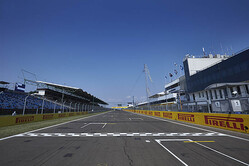 Only a few minor changes have been made at the Hungaroring ahead of this year's race.

The grip of the inner part of the pitlane has been significantly improved, while a new debris fence has been installed on the right between Turns 3 and 4.

Furthermore, at the end of the double kerb on Turn 4 there is now a flatter and more even route back on to the track should any driver go completely to the right of the kerb.

Unlike the previous couple of races where there were three DRS zones, there will be two this weekend, both consecutive and sharing a detection point 5 metres before Turn 14.

It's the same tyre selection this weekend as it was for Germany (medium, soft, ultrasoft) and the two circuits have some points in common - as well as many notable differences.

The Hungaroring is a constant series of twists and turns, a bit like the Motordrom section in Hockenheim, but unlike Germany there's no rest for the tyres over the course of the relatively short Hungaroring lap - and no rest for the drivers either...

Like Germany, the notable feature in Hungary is the 'gap' in the tyre nominations, with no supersoft nomination between soft and ultrasoft. The medium is the hardest compound. Furthermore, this is the first time ultrasoft has ever been chosen for the tricky and bumpy Hungaroring.

Overtaking is notoriously difficult, putting the emphasis on qualifying well and finding an effective race strategy. Handling and agility is more important than outright power. It's all about mechanical rather than aerodynamic grip, despite high downforce levels.

A one-stop supersoft-soft strategy was Sebastian Vettel's winning option last year (selected by the majority of drivers) in a race that was also affected by an early safety car.

While the Hungary weekend usually takes place in blazing sunshine, much like Germany last week, scattered storms are expected throughout the weekend, particularly on Friday and Saturday.

2018 marks the 33rd Hungarian Grand Prix. The race, joined the Formula One calendar in 1986 and has been held at the Hungaroring ever since.

Aside from Hamilton, four previous Hungarian Grand Prix winners are set to line up on the grid this weekend. Fernando Alonso took his maiden
win here in 2003 with Renault, Kimi Raikkonen won in 2005 for McLaren, Daniel Ricciardo won with Red Bull Racing in 2014 and Sebastian Vettel took victory with Ferrari in 2015 and 2017.

McLaren is by far the most successful constructor at this race, with 11 victories, four more than closest rival, Williams. Ferrari has seven wins, while Red Bull and Mercedes are the only other multiple Hungarian GP winners with two victories apiece.