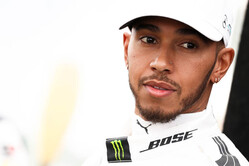 Speaking to Sky Sports Italia following today's qualifying session that saw Lewis Hamilton fail to post a time in Q2 after suffering a hydraulics failure at the end of Q1, the Briton was asked if the car was damaged as a result of him running wide and over the notorious kerbs on an earlier run.

"I didn't really understand what had happened," he said. "In my mind I thought I might get the car back on track, but they asked me to turn the car off. So I jumped out and I was trying to push it back, but there was so far to go.

"Then I saw it was leaking oil and everything," he continued, "so I knew I had to stop and let them put the car away somewhere."

Asked if the issue was due to running wide in Turn 1, he said: "No, no, we use the kerbs the same every lap. I got to the kerb, and just before the kerb, I think the steering broke."

However, moments later, Toto Wolff suggested the opposite.

"We seem to have damaged a bit in the car, or something, going over the kerb," he told Sky Sports, "and that caused the hydraulic leak.

"The car is coming back, so we need to check if that was really the case," he added.

"We had a failure at Turn one as Lewis ran the 'normal' kerb which all the drivers use in that stage of qualifying," the spokesperson told reporters. "Then, with failed power steering as a result of the hydraulic failure, he had the 'jumping' moments that were seen on TV and which people understandably thought might have been the cause of the issue, but were in fact a consequence of it."

In the moments after parking the car, Hamilton got out and knelt beside it, the world champion appearing shocked by the failure. The moment followed speculation in the paddock during this morning's session that the Briton was unwell or out of sorts.

When asked if there was anything troubling Hamilton, who earlier this week agreed a new two-year deal, Wolff laughed and replied: "He's in a great mood. We had a laugh in the debrief this morning... we're good."

However, Hamilton's former teammate, Nico Rosberg, disagreed, saying he was concerned by the world champion's body language in the moments after the failure.

"This is something I'm a bit worried about," said the German. "I've never seen that body language from him before.

"We saw it for the first time at Silverstone," he added, "and now again for a very long time there... disbelief, or something. Of course it's tough but this is a new body language, I've never seen that from Lewis."