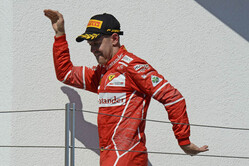 Having suggested in the aftermath of the British Grand Prix that the first lap clash with Kimi Raikkonen was deliberate and that it represented "interesting tactics" from Ferrari - a claim subsequently backed-up by members of his team - Lewis Hamilton subsequently withdrew the remark.

However, clearly still unhappy at missing out on a record sixth home win, the Briton has cast doubt on Ferrari's post-race celebrations at Silverstone suggesting they signify an inherent weakness within the team.

"We had a super car, a great strategy and we did it at their home," cried Vettel in Italian over the team radio on his cool down lap. "Now we take the English flag and hang it in Maranello... Yes!"

"I see that as a weakness rather than a whole need to even say anything," said Hamilton today when asked if taking victory on Vettel's home soil would be satisfying. "For me it's something that we can work with, it doesn't affect me whatsoever. So, good for him.

"We will keep our heads down, keep ourselves quiet and focus on trying to do a better job across the board," he added. "That's our approach right now.

"I hope when we do the job this weekend, it won't be focused on whether we did it on their home ground or anything like that," he continued. "I don't think that's going to be necessary. We're just trying to do a better job.

"It will be exciting for you guys to see how things unfold over the coming months. I really truly believe we are strong enough to come back whatever we are faced with. But I wouldn't want it any other way."

Interestingly, the British Grand Prix took place at a time much of the nation was in near hysteria as the England football team reached the semi-final of the World Cup.

Indeed, in addition to Hamilton being photographed in the post-qualifying debrief wearing an England shirt, the euphoric cry that "it's coming home" even found itself etched on the side of the Silverstone track.

Fact is, Vettel and Ferrari had scored an emphatic win at Silverstone, a circuit, where, in recent years, it has struggled, while Mercedes, following a poor start from Hamilton and another dubious strategy call, lost out.

No doubt, should Mercedes beat Vettel on home ground this weekend, we will hear Hamilton congratulating his team... in German.