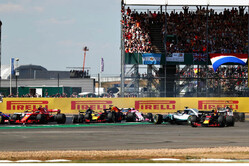 Despite his claims to the contrary, Mercedes has confirmed that Lewis Hamilton did not serious incur damage to his car in first lap clash with Kimi Raikkonen at Silverstone

In the moments following the incident the Briton made a number of calls over his radio, firstly claiming "I think my car's broken", and then "I've lost half my floor, I'm sure".

"We didn't have much damage at all," he reveals. "It was quite a big impact and we were pretty lucky to get away with it.

"The reality though was that you heard Lewis complaining about damage to his floor. We thought that there might have been some aerodynamic damage but that was just from running in the turbulent air of all those cars ahead when he was having to fight through," he added.

"It was only when he got into clear air, and he could feel what the car was like and we could see his pace, that we were able to really understand that the damage was very, very minimal."

Shovlin also confirms what many people have been saying in the wake of the incident and the subsequent claims that the Ferrari drivers were deliberately targeting the Mercedes pair, namely that if Hamilton had made a better start he wouldn't have been there to be hit by Raikkonen.

"We are doing a lot of work here this week trying to understand that, because we know fine well that if we qualify on pole we have got to get off the line as well as the Ferraris and that is what we will be trying to do in Hockenheim," he said.

While Mercedes took pole in France and Austria also, at Paul Ricard Valtteri Bottas was slow off the line and was subsequently hit by Sebastian Vettel, while at the Red Bull Ring, Raikkonen was able to get between the two Silvers Arrows at the start.

"The simple answer is that we got some wheelspin," said Shovlin, referring to Silverstone. "There was a bit less grip on the grid than we were expecting.

"We had done practice starts there and at Silverstone they do actually allow you do a start from the grid. But for some reason on Sunday we didn't quite have what we expected and as soon as you get the wheelspin you lose traction and that lost him places quickly."